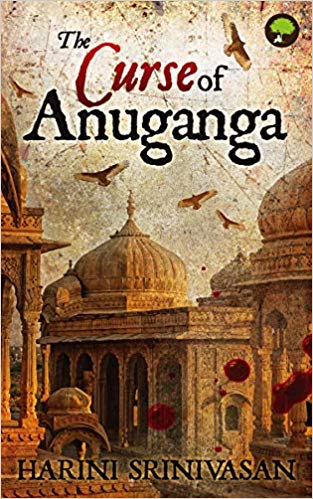 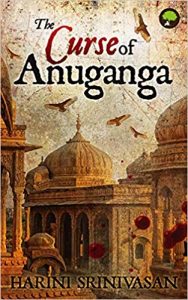 Set in 403 CE in the prosperous town of Nandivardhana (located in modern day Nagpur, Maharashtra), Harini Srinivasan’s The Curse of Anuganga is a historical thriller that carves a niche for itself by being the first historical murder-mystery I have ever read! Srinivasan cleverly perceives her story’s timeframe and weaves a plot around it that is riveting till the turn of the last page.

Written in the third person, the book follows the story of Shaunaka, an intelligent, pensive and self-effacing youth, and that of his foster brother, Ashwini, a gifted goldsmith. Being the son of a renowned goldsmith, Vishunveera, Shaunaka is compelled to continue the family tradition and evolve as a master goldsmith, despite showing neither the aptitude nor an interest in his father’s profession.

At odds with his father, Shaunaka’s lackadaisical stint at his father’s workshop comes to a grinding halt on a day that was to change his brother’s and his entire family’s life all at once.

On an assignment at a client’s house, the two brothers, in a prolonged chain of events, find the client (Vinayashura, a rich merchant said to have royal linkages) murdered in his chambers. The author paints a grotesque image of the appalling crime and dexterously opens up the plot.

What follows next is quite similar to what one would expect two millennia later : the body is discovered, sirens raised, tears shed and the authorities informed. In comes the Dandaposika, Arya Bharavi, an industrious man tasked with enforcing law and order during a time when the Crown’s foes are at their strongest, and an attack is imminent. The turning point of the book sees Shaunaka recruited by the Dandaposika, not just for being an eye-witness, but also for his perspicacity and innate detective acumen. Srinivasan vividly portrays the palpable change in dynamic within the household as the brothers embark on their quest to deliver justice and safeguard the Crown. Her writing style is fluid, and the characters’ credibility is indubitable, right from the late Vinayashura’s wife’s (Devi Tanirika) anguish, to the gravitas of the Mahakavi (Kalidasa), inspired from ancient folklore.

What is a astonishing is just how immersive the text is. Her description of the corner house of the Buddhist Quarters, the lively markets with its myriad of stalls and the august palace grounds, all bring ancient India alive in all its grandeur.

As is the case with any murder mystery, the wizardry is prolonged; investigation commences, discoveries are made and clues are skilfully gleaned. This is especially so in The Curse of Anuganga, with each character, scene, altercation and revelation adding to the convoluted jigsaw puzzle that is the ‘corner-house murder’.

Shaunaka’s spirited sleuthing, coupled with the Mahakavi’s valuable inputs, brings us to the capstone of the novel; a final rendezvous with the wife of the deceased Vinayashura, who, after a lengthy soliloquy, reveals the identity of the perpetrator and the mystery that surrounds it: a harrowing family secret spanning three generations and two kingdoms!

Altogether, Srinivasan’s book is gripping; its conclusion entirely unpredictable and its characters refreshingly original. It portrays Shaunaka’s conundrum in a manner most young men today will identify with; and his mother’s apprehension in a manner mothers today will approve of. What distinguishes the book is its historical context, enriching an otherwise hackneyed (yet my favourite!) genre.

The Curse of Anuganga is a must-read for all age groups, from the exuberant pre-teens to the geriatric!

Shreyas Vadrewu, a fledgling writer, descends from a family of writers; his grandfather Ranga Rao was an illustrious writer widely known for his short stories, translations and novels (Fowl Filcher). He presently studies in Grade 12 in Hyderabad pursuing Science stream.