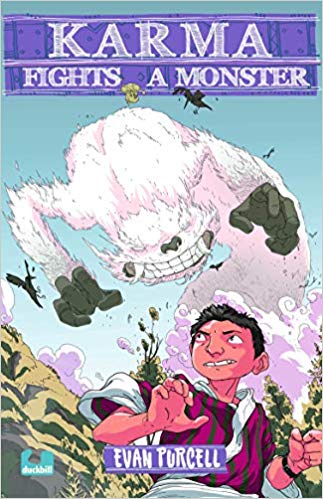 Taking place deep within the rustic and breath-taking bounds of the Bhutanese hills and valleys, Karma Fights a Monster by Evan Purcell is nothing short of an intriguing and hilarious read. The book revolves around the protagonist Karma, a boy of twelve who, as it appears immediately, is quite brave. The reader is told right from the start that Karma was considered the guardian angel of his small village, Jakar. He has a history of facing vile monsters and terrifying mutants and has managed to come out of all of those situations alive! However, this time is his most daring mission yet.

Karma finds out that his new librarian, Ms. Charmy, is actually a monster. This completely threatens the peace and harmony in his school. What’s worse is that Karma doesn’t know if he should reveal this lesser-known secret to his entire school. He faces the constant duality of knowing that his librarian is a monster; but simultaneously being the only person who knew that. All his fear reaches its zenith when the librarian calls him to her office, and his best friend Chimmi leaves him all alone. The story progresses with Karma coming to realize that the librarian, although a horrid monster mutant from the inside, is actually a pretty sweet person from the outside, and so faces an ever-growing guilt. So, now Karma faces the challenge of deciding whether to be nice to her or destroy her like he does the rest of the monsters he comes in contact with. It is important to realize that a key determiner of all of Karma’s actions is Dawa, a girl Karma has a big crush on! He constantly changes and denies his action if it is not to Dawa’s liking. Although I would not like to reveal how this story ends, I would like to say that the end is not only unexpected but also manages to captivate the hilarity that is in line with the rest of the book.