A Life Reduxed: An Autobiography 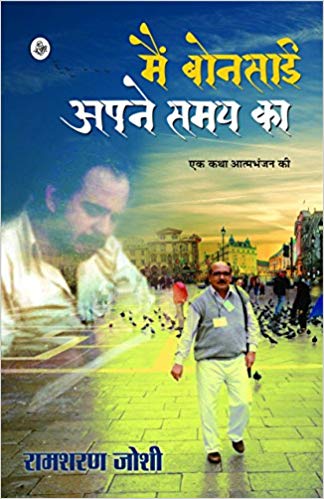 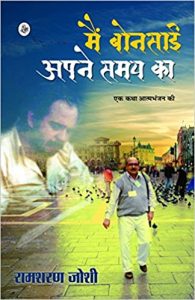 Ramsharan Joshi is a well -known Hindi writer and a journalist.  He has been an activist, editor, social analyst and professor of media studies. He has held a number of prestigious positions: Professor and Executive Director at Makhanlal Chaturvedi National University of Journalism and Mass Communication, Bhopal, Director,  National Bal Bhavan, New Delhi, and Deputy Director, Central Hindi Directorate.  He was also a Visiting Professor at Mahatma Gandhi Antarrashtriya Hindi Vishwavidhyalaya (MGAHV), Wardha.  He held each of these prestigious positions with utmost dedication and sincerity along with his commitment to writing in leading newspapers, periodicals, magazines and dailies in his seven decades of life full of struggles and difficulties. He has written more than a dozen books in Hindi on a variety of contemporary issues and themes related to the socio-political realities of Independent rural and urban India.

Mei Bonsai Apne Samay Ka narrates a number of critical events and life experiences which highlight the courage, grit and determination Ramsharan Joshi exemplifies in his life. It is a social text of his times, of his struggles in the family and society, of his failures and successes and of his vision and hopes for a better social world that he dreams of.  Ramsharan Joshi is a sensitive and conscientious thinker and writer who finds meanings even in the most adverse situation facing him personally or professionally. His unfulfilled dream of being a revolutionary is aptly captured in the title suggesting how his life remained contained and confined in his own milieu, did not bloom to the full extent, and thus remained like a bonsai plant.  The author is truthful and scrupulous in presenting varied experiences from Baswa to Boston and the quotidian whirlpool of life recording events from as early as seven years of age. The honesty with which the author has spoken about his own desire of love, sexuality, of his failed relationships with women and his close associations with several prominent political and literary personalities of his times is nothing less than a rollercoaster ride for the reader. From the initial years of life starting from the small town of Baswa in Alwar district of Rajasthan where the author was born to his travels in Boston, Belgium, Germany, Mauritius, Pakistan, Beijing, Rome, Libya, Paris and Canada and the USA, Joshi has seen several highs and lows. The caste, class, regional and gender hierarchies and their interlinkages come alive in distinctive social roles played by various characters in this work.

The genre of autobiography situates the idea of the ‘self as other’ in an interesting way considering that the lived life of an individual can be shared with others. In this art of writing about one’s own life experiences, the autobiographical narratives are to be situated in the larger social, political and cultural context.  As a social and political (con)text, Joshi aptly describes the vagaries of everyday life against the background of  political events like the period of Emergency under Indira Gandhi, the highhandedness of power by her son Sanjay Gandhi, imprisonment of several prominent political leaders and journalists, crackdown on the freedom of press and expression, and return to an authoritarian regime in Indian politics.  For a journalist to remain true to his  profession during such dark times is not just difficult but at times impossible. The author describes in detail the complicity between journalists, bureaucrats and politicians, their desire to be part of the power-corridors and nexus of patronage and protection that corrupts the independent-minded journalists very early in their career. The craving to be closer to the political elites and authorities has become a trade-mark of this profession and journalists don’t shy away from showing and boasting about it in their writings. Joshi’s life journey of an activist-journalist shows how he tried to distance himself from this kind of nexus, and instead remained close to his calling for being involved in the activities helping the world of bonded labourers, child labourers and a host of other radical social activities.

Hindi journalism has over the years tried to capture the world of rural voices, lives of poor and disadvantaged sections, their beliefs and superstitions, miseries of penury of rural artisans and labourers under the exploitative grid of landowners, moneylenders and musclemen in the villages and small towns of North India. Ramsharan Joshi did not compromise or comply with the dictats of the powers that be. This autobiography takes us through myriad accounts of social, political leaders, litterateurs, film actors, directors, Left revolutionaries and writers such as Vishnu Nagar, Swami Agnivesh, Kailash Satyarthi, Arvind Jain, Indira Goswami, Vidhyaniwas Mishra, Anwar Sen Rai, Amrit Pal Dange, Surendra Verma, Narshimha Rao, Shankar Dayal Sharma, Pranab Mukherjee, Nana Deshmukh and many more whom he interacted with and interviewed in his illustrious life.

Ramsharan Joshi is an institution in himself who started as a newspaper-hawker and reached the pinnacle of his profession as a  journalist. He wrote on the people of Kalahandi, Bastar, Sarguja, Daltanganj and also went on reporting from several countries of Asia, Africa, Europe and the US. He shares his  excitement as well as dismay while reporting on the Indo-Pak war of 1971, on Sri Lanka, Afghanistan, Pakistan, China, Japan and many others. His travels with prominent political leaders on foreign visits or covering their political meetings in Delhi from time to time throw light on the world of both journalism and politics in an interesting way. Despite the high confidence and closeness that he shared with the power-elites of the country, he continued to remain sensitive and true to his search for revolutionary truth of a certain kind. Mei Bonsai Apne Samay Ka is a political treatise of Independent India that must be read by generations of journalists and writers who should continue to keep the conscience of the nation alive through their writings.