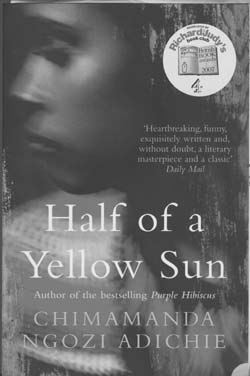 There are some interviews in the appen- dices to the novel in which Chimamanda Ngozi Adichie tells us what led to the writing of her second novel Half of a Yellow Sun. She grew up, she says, ‘in the shadow of Biafra, because I lost both my grandfathers in the Nigeria-Biafra war, because I wanted to engage with my history in order to make sense of my present, because many of the issues that led to the war remain unresolved in Nigeria today, … because the brutal bequests of colonialism make me angry, … because I don’t ever want to forget. I have always known that I would write a novel about Biafra.’ She also wanted to make ‘a strongly-felt political point about who should be writing the stories of Africa.’ She prepared for it, in a sense, she says, by writing ‘an awfully melodramatic play called Love for Biafra’. She also wrote short stories on the theme. She read books on the subject, looked at photographs, talked to people who lived through those times.

Some of the characters are based on ‘actual persons, (but) their portrayals are fictitious as are the events surrounding them’. Adichie pays special tribute to Chinua Achebe whose stories about Biafra were particularly inspiring for her.