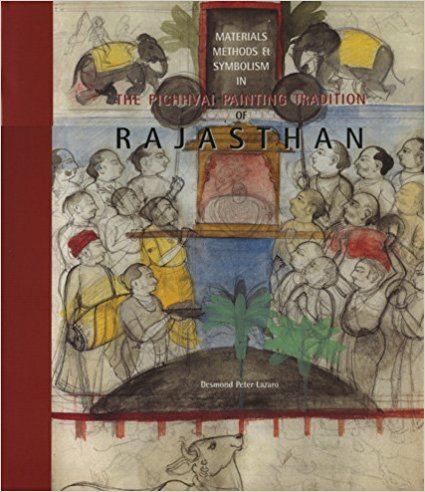 Pichwai painting is one of the best documented painting traditions in India. There have been several studies of pichhwai painting’s background, themes and iconography, such as Robert Skelton’s Rajasthani Temple Hangings of the Krishna Cult (1973), Talwar and Krishna’s Indian Pigment and Paintings on Cloth (1979) and Amit Ambalal’s Krishna as Shrinathji (1987). There has been, amazingly, a study of pichhwai painters by a psychoanalyst interested in the perceptions and meaning of creativity in a tradition-bound community (Ronaldo Maduro’s fascinating Artistic Creativity in a Brahmin Painter Community, 1976). There has been a wonderful, intensely detailed study of the chief artist families in Nathadwara, in Tryna Lyons’ The Artists of Nathadwara (2004). Further, the cult that pichhwai paintings serve, that of Krishna as Shrinathji, the Vallabha Sampradaya to which it belongs, and their philosophy of shuddhadwaita have all been studied by historians, religious historians and anthropologists, whose work then feeds into and off the studies of the remarkable paintings as well.

Among the more innovative studies relating painting, religious philosophy and ritual are several essays by Woodman Taylor, including a major one in Gods Kings and Tigers edited by Stuart Cary Welch (1997). In adding to this corpus, Desmond Peter Lazaro should have had a hard act to follow. There seems so little ground left to cover that a new entrant to the field would be hard pressed to find an area to call his own.

Why has pichhwai painting attracted so much attention when so many important courtly painting traditions have hardly one or two studies worth the name? For one thing, the paintings can be utterly wonderful, and their large scale – upto six feet square – serves to make them more ‘approachable’. In pichhwai there are large areas of beautiful colour and bold, easily grasped motifs – fish, lotus, tree, cow, gopi, god. Even when the details of the iconography and content are not known it is not difficult to grasp the concept – this one sets the scene for a lush bower, this one shows worshippers gazing adoringly at their god. There is none of the ‘for-connoisseurs-only’ sense that attaches to miniature paintings from princely courts, where the artist hides tiny details or conjures up elliptical narrativizations to tease the jaded connoisseur’s eye. For another thing, pichhwais arise out of a fascinating context, and the paintings are part of a cult that believes that the sense pleasures that please man will please god, so he should be surrounded by music, incense, delicious food, rich clothes and his shrine should be hung with paintings. It is hard, even for a bone-dry scholar to resist such a philosophy. And what must attract scholars even more is that the tradition is still living: very few artists may be producing the highest quality paintings, but there are enough members of traditional artist families alive and working in Nathadwara – the cult center— to provide a magnet to which scholars are ineluctably drawn. A fourth feature which is bound to increase the attention that is paid to Nathadwara is its role in the production of popular or calendar art. The town’s painters, finding patronage drying up for their traditional work, turned to producing paintings and collages for other markets; the ‘sceneries’, collages and icons that they made for mass production are becoming increasingly well known and increasingly collectible.

For readers who know little about pichhwai paintings, and have suffered the above paragraphs with mounting impatience, here is some background information. The term ‘pichhwai’, which literally means ‘something behind’ or ‘backdrop’ are large-sized paintings on cloth that are made to hang behind the icon of Shrinathji. ‘Shrinathji’ is the name given to a particular image of Krishna, which is said to have emerged miraculously on Mount Govardhan in the 16th century. The image came into the care of Vallabhacharya, a great bhakti saint who emphasized the worship of Krishna as a child, encouraging worshippers to adopt the attitude of loving and playful seva, offering every comfort and pleasure that a beloved child might want. Thus Vallabhacharya’s followers awaken their icon each morning with song and breakfast; the day proceeds with changes of clothes, and offerings of meals, more music, toys. On festivals, elaborate enactments are mounted to bring the festival to the icon: the priests play holi with the icon, and at the peak of summer they organize jal-krida or water games, by flooding the shrine and setting toy boats afloat and scattering lotuses on the water. In his philosophical writings, Vallabhacharya enfolded this playful and joyous worship within a vision of the world as entirely a part of the Divine: shuddhadvaita or pure non-dualism that sees all matter as a manifestation of God. Far from dismissing the material world as maya, the Vallabha Sampradaya delights in it, and further believes that god delights in it. This gives rise to the rich material culture surrounding Shrinathji, including the pichhwai paintings that adorn his shrine. The pichhwai function as theatrical backdrops for the theatre of the temple’s rituals. They bring the world into the shrine, be it the dark clouds of the monsoon or the superb full moon of the winter months. Typically, a pichhwai ‘assumes’ the presence of an icon that it will hang behind, and paints the things that surround him, including trees, mountains, gopis and cows. Pichhwais are changed each day, or sometimes several times a day, helping to build scenes appropriate to the season or the festival at hand. Of course, other objects are also used to complete the ‘set’, including floral arrangements and three dimensional models and toys.

The cult originated in the Braj region but was affected by Aurangzeb’s antipathy in the 18th century. Shrinathji – and his establishment — were offered shelter by the Maharana of Mewar, but legend is that the cart carrying the icon repeatedly broke down at the small village nearby. The priests took this as a sign of Shrinathji’s wish to stay, and established the cult center they called ‘Nathadwara’. The place-name is thus almost synonymous with the cult – and with the associated style of painting — though in fact there are seats of great importance in a number of other sites in Rajasthan and central India; here other icons dating to the time of Vallabha’s grandsons have their homes, and associated very fine painting traditions have sprung up there. In Nathadwara we know that two major painter communities, Brahmin and Jangid, have coexisted and competed with each other. In service of the cult they made not just the pichhwais that hang behind the shrine, but depictions of the icon with pichwais and priests, for pilgrims to take away. There are also manoratha (‘longing’ or ‘desire’) pictures which depict a worshipper in the presence of the icon.

Clearly then, pichhwais are a rich tradition and richly deserve the scholarly attention they have received. In what way does the book under review – Lazaro’s Materials Methods and Symbolism in the Pichhvai Painting Tradition of Rajasthan – add to our knowledge? Lazaro’s perspective and aims are different from those of any of the authors mentioned at the outset of this review. Lazaro writes not as a scholar but as an artist, who apprenticed himself to a traditional artist for twelve years and learned his technique. His aim thus is not to plumb the history of the tradition or to decode its iconography or read the images. His aim is to share with us the steps by which the painting is made – how the initial sketch is worked out; how compositions are evolved, how pigments are made and applied; further, to communicate a sense to us of being in a traditional artist’s studio.

It is unfortunate then, that Lazaro chose to publish a study of pichhwai painting based on his experience with an artist who is not a pichhwai painter. Lazaro apprenticed himself to Bannuji, a famous miniaturist from Jaipur who could work with great facility in any style. It appears from the book that Lazaro commissioned Bannuji to make three pichhwais, intensely documented the process of painting, and published the results as this book. Had Lazaro presented this book as a documentation of Bannuji’s technique, one’s reception of it would have been different; but the assertion, in the title and through the book, that this is a documentation of the pichhwai painting tradition causes some alarm. To honestly fulfil that project, the author should have worked with a pichhwai painter. It is not enough to state at the outset, as the author does, that ‘the technique is the same as for miniature painting.’ A book that deals with the technique of pichhwais should ideally look at the range of pichhwais, including those made at centers in Kishangarh, Kota or Surat; study changes in techniques and pigments over time; and also discuss mixed-technique works such as those that combine block printing or appliqué with painting. Certainly the rather New Age philosophizing about hidden yantras, ritualisitic significance of every act and the spiritual advancement of the painter would not be discussed so often had the author dealt with another painters who understood the tourist market less well.

Assuming that further editions of the book might bear a less misleading title, one can then try to assess the book as a record of an important miniaturist’s technique. There have been other studies of pigments and methods, but this is by far the most lavishly illustrated and well produced, and is valuable in this regard. There are a number of interesting insights into miniature paintings in the chapter on pigments; for while demonstrating the use of colours, Bannuji has evidently discussed with the author the use of these pigments in older miniatures. A patient reading of this chapter would disclose many aspects of the painting of foliage, for instance, so richly achieved in so many different schools. Ultimately, this increases respect for the superb skills and techniques of miniature painters of old.

Kavita Singh is an Associate Professor at the School of Arts and Aesthetics, Jawaharlal Nehru University, New Delhi.