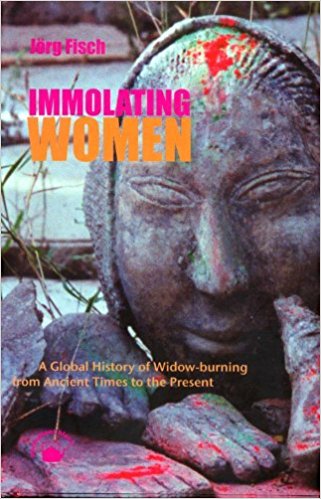 From this cliff’s brow For wifehood’s glory With spurning feet I dart Down into yon fire’s heart To meet him, ne’er to part Flames reddening o’er me To nestle to his side, In Cora’s bowers a bride! O love, though thou hast died, I’ll not forsake thee. —Euripides, Supplices A couple of decades ago a devoted old couple lived in the South. In the evening of their lives they sat together each evening in their easy chairs on the verandah watching the world go by. A pleasing picture of simple pleasures, togetherness, a sense of belonging, security, an ideal. One day the husband travelled out of town on work and died of a heart attack. Fearing to tell the mother this news the children merely told her that he was unwell and returning the next day. In the morning the sons left to fetch the body home and found on their return that she had died peacefully as she waited for him sitting in her easy chair. The problem of telling her did not arise. The news never reached her ears.

They were cremated together. This awesome incident reminded me of the early debates on what was a true sati. How the true wife would die on hearing the news without having to be walked to the pyre. Not being a historian or an anthropologist but an activist I often shuddered at those debates.

While widow burning has been widely debated inside and outside India its anthropological, religious, social and political contexts have not been fully explored. Largely viewed as a custom that is peculiarly Hindu in its cultural moorings it has long been India’s shame and glory. That following into death is a manifestation of a public ritual that is a global phenomenon closely linked to certain beliefs in the hereafter is demonstrated by Fisch’s massive scholarly study, Immolating Women: A Global History of Widow Burning from Ancient Times to the Present. Jurg Fisch’s painstaking study traces the practice of widow burning from ancient times to the present.

Sati has always been a fascinating phenomenon, moving swiftly between black and white, evoking admiration, protest, horror and envy in varying circumstances. Fisch cites two examples: Paolino da San Bartolemeo wrote in 1796 (addressing Pope Pius VI), “If this law… were to be introduced in Europe then so many good husbands would not wander around restlessly and the rule of women in northern countries would come to an end” (p. 356). Marie van Bunsen in 1903 compares the valiant courage and self sacrifice of the widow to the most favoured christian martyrs in its moral aesthetic effect (p.359). Even those who witnessed immolation felt admiration for the widow despite anger, grief and disgust. This, Fisch seems to argue, was no contradiction. The disgust was for the institution while the admiration was for the widow. The book is divided geographically with India in the second part and the rest of the world in the first. The insights from the first part are picked up and developed in the second. The first part looks at Egypt, Europe, America, Africa, Oceania, China, Japan, Central Asia and South East Asia. India shines in solitary glory in the second part. Fisch looks at the different forms the custom has taken in the course of history. He looks at the conditions and functions of these forms and how widespread they are. Although widow burning or following into death is a historically universal phenomenon it cannot be portrayed in the form of a universal history. Appearing time and again in history the interconnections between its different forms are not easily determined. The origins of the custom cannot be reconstructed. What provides the internal coherence of this study is the fact that the decisive precondition for following into death is a particular form of belief of the hereafter. Whatever the material functions of the custom (political, economic, cultural) it cannot be maintained as a public ritual without a belief in the hereafter. The annihilation of a life is compensated by the belief that the person has been sent to another world. So the loss in this world is a gain in the next, which is a continuation of this world and not its contrasting image. The social order of this world is carried into the next with no intervening day of judgment. This is perhaps why neither Christianity nor Islam which preach a day of judgment and a contrasting hereafter do not uphold this custom. This significant insight alone makes the study worthwhile. What are the social conditions that give rise to customs such as following into death and what effect do these customs in turn have on society? Since only certain categories of people can be accompanied in death social inequality is another precondition of the custom. Depending on whether the following into death is based on class or on status Fisch points out that it can be defined as an institutional following into death or an individual following into death. While both types strengthen the position of those who have a right to be followed in death the divisions within a society determine the nature of the position. While the institutional following has to do with the political system and the position of the ruler and ruling class the individual form falls within the realm of social conditions particularly the matrix of gender relations. Only rulers and husbands are entitled to the honour.

The revival of sati with Roop Kanwar’s death in 1987 illuminates our understanding further. The protest against sati mobilized 3000 people whereas the march in support of sati mobilized 70,000. Widow burning was seen as a unique embodiment of the traditional values of Hinduism to be maintained and nurtured. The prohibition of sati was condemned as a violation of religious freedom and the secular nature of the Indian state was attacked. While in the nineteenth century the opponents of sati could be accused of collaborating with foreign rule, in the twentieth century they were intellectuals corrupted by decadent western ideas, alienated from tradition and far from the feelings and concerns of the common people. The counter argument was based on women’s rights, inalienable, derived from the Constitution and any overriding religious custom, rite or practice. Widow burning is not a subject that India has put behind it forever.

The central question is how does one construct the relationship between the respect for cultural individuality and the universal claims of moral norms? Is it merely a matter of perspective? Although the custom has encountered criticism, rejection and resistance its disappearance was linked to the spread of rationalism resting on the argument of equality derived from natural law and human rights. Regardless of multicultural declarations any country tolerating this custom would lose its standing in the international community. The suppression of such customs has become an unspoken but compelling standard of civilization. A universal claim based on human rights which is above all religions and becomes a standard to measure them. For this relief we give thanks. The success with which this custom was abolished, the upholding and history of this success can be seen as reflecting both the physical and intellectual power of Europe.

Fisch’s detached, impersonal, scholarly discussion of incident after incident, his painstaking tracing of causes and factors, his refusal to draw apparently obvious conclusions, the measured ponderous progression of this text from ancient times to the present, and his rare collection of illustrations makes the book valuable reading. His judiciously crafted conclusions reassure us of the possibility of a sane society.

Vasanth Kannabiran is a feminist writer.