Why Do We Want Boys and Not Girls? 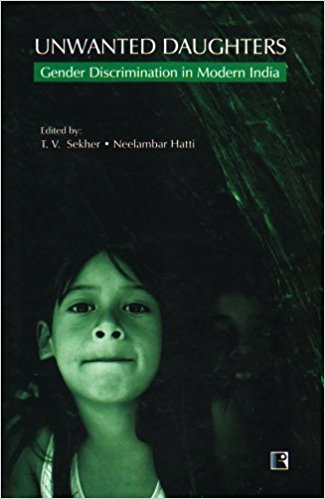 Why Do We Want Boys and Not Girls?
Sandhya Srinivasan
UNWANTED DAUGHTERS: GENDER DISCRIMINATION IN MODERN INDIA by T.V. Sekher Rawat Publications, 2010, 276 pp., 695
August 2010, volume 34, No 8

India and China are two countries in the world where there are more boys than girls in all age groups. In India, there are just 933 females for every 1,000 males (2001 Census). This is because females are just more likely to die than males. Infant girls may be killed soon after birth; they may be starved, poisoned or suffocated to death. Little girls are given less food than boys, and malnutrition makes them more vulnerable to illness. The medical risks that women face during pregnancy are heightened by gender discriminatory practices with consequences such as anaemia, physical violence, and withholding of urgent life saving treatment when they need it. In the early 1980s, the introduction of a new medical technology further worsened this situation and sparked off a campaign by health and women’s rights activists, new laws, litigation and debates. It also led to some important research. The book under review is a collection of papers looking at various aspects of this technology’s use—who uses sex selection technologies? Why do they use them? What does this do to societies?

Amniocentesis is a medical test that can be conducted on a pregnant woman in the 16th week of her pregnancy. Fluid extracted from the amniotic sac surrounding the foetus is tested for various medical conditions. It can also be used to identify the sex of the foetus. Doctors in India seized upon the opportunity created by the strong son preference in Indian society and started marketing amniocentesis as a technology for prenatal sex detection to be followed by medical termination of pregnancy if the foetus was of the ‘wrong’ sex—which in India would be a female foetus. The profession’s unethical and blatantly aggressive promotion of this technology as a medical solution to a socially created demand of the Indian societyled to its widespread use across the country.