Where the Mind is Without Fear 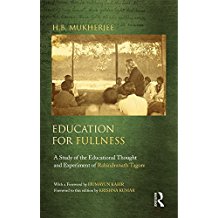 Where the Mind is Without Fear
Debasish Chakrabarty
EDUCATION FOR FULLNESS: A STUDY OF THE EDUCATIONAL THOUGHT AND EXPERIMENT OF RABINDRANATH TAGORE by H.B. Mukherjee Routledge, New Delhi, 2013, 494 pp., 1195
September 2013, volume 37, No 9

This is the second edition of a collection of essays, which were first published by T.K. Oommen in 2007. This collection has three new essays on three distinguished sociologists/social anthropologists in India—Y.B. Damle, M.N Srinivas and G.S Ghurye. These essays were written over the span of T.K. Oommen’s professional career and address issues and concerns with regard to the production and circulation of sociological knowledge in South Asia at large and India in particular.
In the introduction to the book, Oommen identifies three ‘persisting tensions’ in sociology—first is the convoluted relationship between sociology and social anthropology in postcolonial countries. He locates the source of the problem in the origin of both these disciplines in the West and their journey to the colonies. In the West, anthropology was a product of colonialism and studied ‘other cultures’ and small-scale societies while sociology was a product of modernity and studied the modern formations in the society.