Where is the Party? 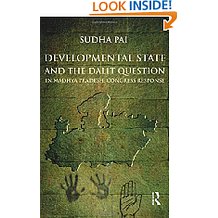 Where is the Party?
K.K. Kailash
DEVELOPMENTAL STATE AND THE DALIT QUESTION IN MADHYA PRADESH: CONGRESS RESPONSE by Sudha Pai Panjab University, Chandigarh, 2011, 537 pp., 995
May 2011, volume 35, No 5

In this ambitious and empirically rich study Sudha Pai attempts to make sense of the Congress Government policies in Madhya Pradesh (MP) towards dalits and tribals between 1993 and 2003. It draws insights from three fields of scholarship that Pai has distinguished herself in comparative politics, state politics and party politics in India, to advance the argument that the policy programme was a strategic attempt by the Congress party to respond to the rising dalit assertion taking place in northern India and to meet the challenge posed by two competitors, the Bahujan Samaj Party (BSP) and the Bharatiya Janata Party (BJP). It concludes that elite driven state sponsored efforts to transform an unequal society from above are unlikely to reach fruition in the absence of a strong political movement from below by the deprived communities themselves.

Pais immensely detailed study is in four parts, has ten chapters, besides an introduction, conclusion and also a postscript. The first part with three chapters sets the background. It focuses on the Congress party in MP, its early history as well as its attempts to broad base itself over the years. This part also has an elaborate discussion on the new dalit agenda and the Bhopal document. Part two and three form the core of the book, with three chapters each and focus on two programmes initiated by the Congress government, the land distribution programme and supplier diversity programme. These two parts are based on extensive fieldwork, analysis of government reports, dialogues and interviews with members of the bureaucracy, political leadership and civil society personnel. The final part examines the implications of these two programmes in the light of the Congress defeat in the assembly election.