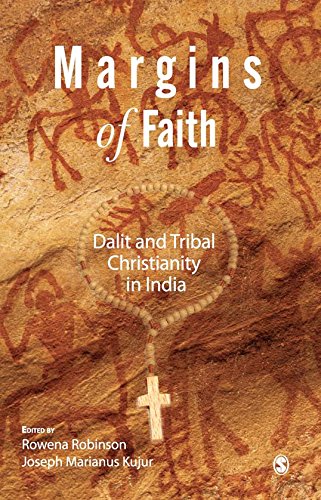 This remarkable work is an intellectual attempt to analyse the experience of socially, culturally, economically and politically dominated and marginalized dalit and tribal Christians. Dalits and tribal Christians constitute approximately 70% of the Indian Christian population. Christianity is an egalitarian religion, but the caste system has found its way into it in India. Dalit Christians within the church were discriminated against and were denied powers within the religious structure. From 1970s onwards, the dalits began to articulate their social, political and cultural expressions in the form of dalit literature, organizations, and political parties assert their urge for a respectable identity. Dalit theology is one of the expressions of this emerging dalit consciousness. In Arvind P. Nirmals opinion, Christian Dalit theology will be produced by Dalits. It will be based on their own Dalit experiences, their own sufferings, their own aspirations and their own hope.

It will narrate the story of their pathos and their protest against the socioeconomic injustices they have been subjugated to throughout history. It will anticipate liberation which is meaningful to them. 1

Margins of Faith: Dalit and Tribal Christianity in India, contains twelve essays written by scholars from all over the world. An excellent introduction by the editors undertakes the task of highlighting that there is no difference between dalits and converted dalits for caste Hindus in India. Indian Christian theology has to reshape itself to reappraise and reimagine Christianity in the cultural context of India.

In Tribal Church in the Margins: Oraons of Central India Marianus Kujur encounters the problem that though Christianity emerged as the religion of the deprived people, in spite of the religious conversion these people remain culturally and socially ostracized. Tribal converts face double marginalization. The tribal natives are against them because in their opinion, churches have ruined their native culture and are working to segregate them. These tribal converts are also not accepted by the orthodox Christians within the church.

Michaels Dalit Encounter with Christianity: Change and Continuity examines the fivefold discrimination faced by dalit Christians: by the state, by caste Hindus, by fellow Hindu dalits, by upper caste Christian community and by subgroups of dalits and Christian themselves. The churches of India have to make trustworthy efforts and develop policies for dalits, which will make them daring enough to face everyday struggle.

Variety of Dalit Christianity in North India is an attempt to show that dalit Christianity is not of a single type, each dalit congregation has different basics. Each may have different backgrounds, and may also differ in organization pattern, class structure or forms of leadership. Different communities depending on their location and social context may face different degrees and forms of discrimination and oppression by caste society.

Christian Piety and the Emergence of Hindu Nationalism in Central India, based on the authors research of a village Mohanpur in Chhatisgarh shows how after the incorporation of Oraon tribes into church, they were alienated from the other locals, both the adivasis and the Hindus. This cultural divide resulted in the emergence of Hindu nationalism in that area. This chapter also brings to light the contemporary negotiation of the empowered tribes with the governing authorities.

Legally Hindu: Dalit Lutheran Christians of Coastal Andhra Pradesh explores the question of dual identity among dalit Christians of Andhra, with a special focus on the Lutherans. They employ Hindu names for legal, public and administrative purpose or to avail the benefits and protections the law offers to dalits. Thus the official Hindu identity remains as declared but a secret one, while their Christian identity is one that is embraced and is socially, culturally and politically relevant to them. Ironically, Christianity prevents them from availing the legal benefits but at the same time it strengthens their capacity to struggle for their legal rights.

Contradiction and Change in the Mizo Church exhibits that Mizo society not only underwent significant changes but also emerged as a fundamentally transformed society under the strong influence of Christianity. Here Mizo language was used for the spread of Christianity. It popularized Christianity as a symbol of nationhood. Though it sympathized with some of the aspirations of the people, it discouraged the antigovernment stand and use of violence.

The Broken Mirror: John Masihs Journey from Isai to Dalit narrates the story of John Masih, a Chamar by caste. It portrays his failure to move away from the stigmatized past and to reconstruct a new identity for himself by embracing Christianity. In the end, after exploring many ways out, he became a catechist at an ashram and tried to merge Catholicism with some forms of Hindu worship. However he found himself marginalized in the ashram too and left the place and embraced dalit identity. He realized his inability to obliterate the mark of untouchability and decided to take it positively. He imbued his dalit identity with new meanings and possibilities.

Christianization, Hinduization, and Indegenous Revivalism among the Tribals of Gujarat Lobo discusses the incorporation of the tribes of Gujarateither by Christianity or by Hinduism, against the backdrop of rising politicization of the whole issue of conversion. The tribals in Gujarat are marginalized in terms of their identity and in terms of economy and polity. Even economic development is of no worth for them and has left them on the periphery. Religion should work as an instrument to raise their selfesteem and to empower them. Now Christian missionaries are associating the new identity of the tribals as moolnivasi (original inhabitants), to satiate their urge for identity, livelihood and political rights.

The Catholic Church and Dalit Christian Activism traces the complex and uneven interaction between Chritianity and Dalit activism. Dalits want to get rid of their untouchable identity through conversion but this proves a futile attempt. It is the failure of the church itself to invalidate the inequality of caste. In addition dalit Christian activism has also become prominent only due to the dalit priests who initiated this issue.

Identity, Conversion and Violence: Dalit, Adivasis and the 2007-08 Riots in Orissa illustrates the division of local communities by external agencies under hegemonic politics. Religious conversion is basically viewed as being done for some material gain but for the tribal communities, it is not just for that but also for their desire to acquire dignity and respect.

This commendable endeavour by the scholars to perceive dalit theology that has emerged as the need of the hour, and stands by its distinctiveness and creativity is of a remarkably high order. This is a highly technical work extremely rewarding for all its readers.