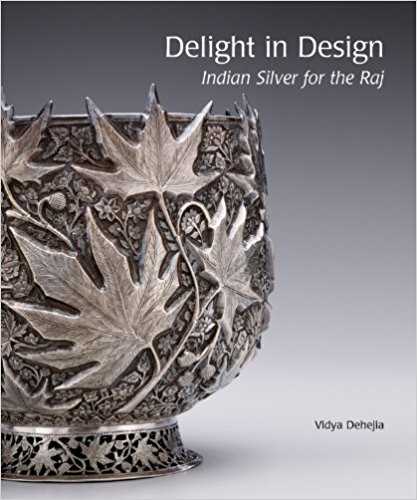 When the dowager Maharani of Beri, my god-daughter’s grandmother, visited me for the first time, she brought me a long, narrow pen box, decorated with the curvy exfoliated scrolls characteristic of Kutchi silver. It complemented similarly embellished salt and pepper pots, a tray, pomander, and spice boxes inherited from my parents—all in a style that had gained popularity over a hundred years ago, with patrons not only in India but all over the world. Familiar as Kutchi to me, from my wanderings over the years through the lanes of Shroff Bazaar in Bhuj, where silversmiths still chisel and chase similar motifs even today. Many claim descendence from the legendary Oomersee Mawjee, 19th century silversmith to the Maharao of Kutch of the time. Oomersee Mawjee, along with his contemporous Southern counterpart P. Orr & Sons, creators of the so-called ‘Swami silver’ style, is one of the significant dramatis personae of Vidya Dehejia’s Delight in Design, bought out to accompany an exhibition of Indian silver from the Paul F.

Walter and Julian Sands Collections at Columbia University. The exhibition—of silver objects made for the Empire and its Burra Sahibs—must have been extraordinary. This book is a delight in itself.

A book on Indian Silver for the Raj could have been scripted as a scholarly monograph on a somewhat esoteric, isolated aspect of the Indian silversmith tradition. Equally, it could have remained a gloriously illustrated catalogue of wonderful examples of exquisite craft, to be cast unread on a coffee table. Magically, Vidya Dehejia delivers much, much more than the sum of both. Delight in Design, impeccably produced by Mapin, is not only beautiful to look at, intelligently researched, and elegantly written; it provokes questions and provides insights into so many wider aspects of the Indian craft tradition—as relevant today as they were a century and a half ago, when these amazing objects were being crafted.