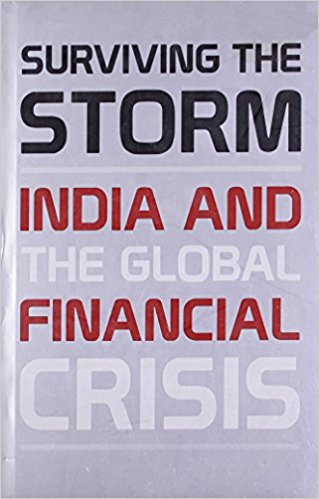 Economist Paul Romer said: A crisis is a terrible thing to waste; Shekhar Gupta says: ‘This book (Surviving the Storm) is proof of that’; and I say: ‘I agree’.

The book, a chronicle of the 2008 financial crisis has several parts revolving around a theme, the last theme on Theoretical Underpinnings, actually glimpses of the huge debate of questioning mainstream economics, the relevance of it at least in part, something we are used to if one follows Paul Krugman in the New York Times. The reader will find the eclectic jerks quite amusing: crisis aside, reading this book you will come to know that the annual revenue of the Kota coaching classes for the IIT entrance exams exceeds the combined budget of all the IITs; you will also know of Cassandras Dream, which is particularly relevant now, as like Cassandra, who had two attributes, first, she could see the future, second no one would believe her, it is almost what is likely to happen, in the sense that someone will have the correct answer to fix the crisis; however, no one will believe that person.You will be left with a bitter aftertaste that the top 50 banks in the world have a few Chinese entities but no Indian bank makes it to the list. Bibek Debroy writes that during a G20 gathering in the crisis crunch time, while Saudi Arabia, China and Japan offered money, India offered advice.

This book also has an aspect which normally most will steer clear of. India has a governance deficit but surely does not have Central Banking deficit; quite a few economists around the world hold RBI as a venerable Central Bank which has time and again helped India stay away from storms, yet here it is astonishing to know that the RBI could have done better, as Ila Patnaik and a few others point out.