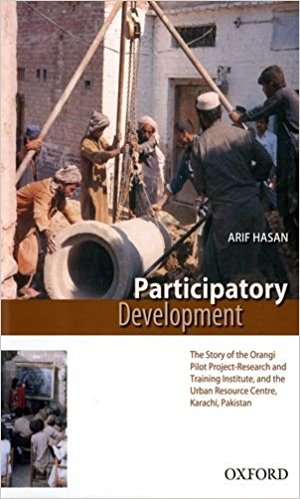 It is alleged that government officials, urban planners and politicians cater to the interests of the elite and not to lower income groups in matters of urban development. Arif Hasan has considerable direct experience in urban architecture and planning, therefore, this book approaches the many challenges practitioners face in achieving the goal of executing participatory development projects in countries such as Pakistan from paper to practice. An architect planners description of the story of the Orangi Pilot Research and Training Institute (RTI) and the Urban Resource Centre (URC) in Karachi, Pakistan is a promising read that reflects these challenges. Although Arif Hasan was the chairperson of both the institutes, the idea was born as a result of an understanding between a social scientist, Dr. Akhtar Hameed Khan and Agha Hasan Abedi, Chairman of the BCCI Foundation.

The institutes were set up as models of community participation and local resource mobilization that could overcome the problems government programmes face in upgrading poor settlements and in poverty alleviation. Both the Institutes are located in Orangi, a squatter/slum community (Katchi Abadi) with a population of 1.4 million in Karachi, Pakistan. These two institutes were a part of a larger project known as the Orangi Pilot Project (OPP) that was set up in 1980 and had various trusts and associations formed out of which these two institutes are part of the larger vision of OPP. The OPP in addition to RTI and URC also has other divisions within the OPP which are as follows: (1) Orangi Charitable Trust, (2) Karachi Health and Social Development Association (3) Rural Development Foundation (4) OPP Society. The issues at stake for the project were: sanitation, housing, health, education and employment. All these are discussed at length in the book. The first part of the book is an introductory chapter on Pakistan in general and Karachi in particular in two chapters. The evolution of the OPPRTI and URC from its origins to the development and consolidation of its methodology, principles and advocacy strategy have been explained from in the second and third parts.