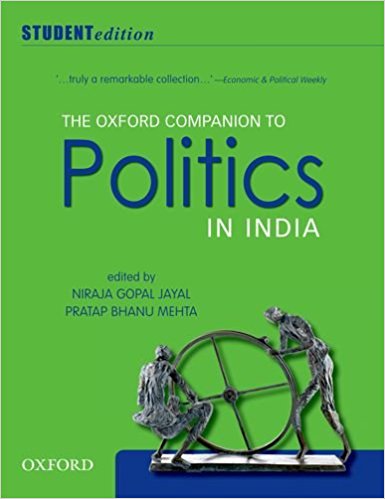 A consistent lament of those teaching Political Science in India has been the general absence of globally competent thematic collections that address the specific requirements of an Indian readership. Niraja Gopal Jayal and Pratap Bhanu Mehta contribute fundamentally in remedying this inadequacy by inviting us to dip into the complexities of Indian politics. The book is schematically drawn up into eight broad themes that touch upon almost every conceivable facet of Indian politics. These encompass a focus on the institutional environment that underpins and in many ways structures Indian political processes and outcomes, an exploration of the varieties of identity claims made on the Indian state as well as an audit of the ambivalent strategies adopted by the Indian state to resolve these claims, ideological differences within the political spectrum, an account of the different species of social movements, a consideration of how India relates to the external world and finally a discussion of the modes of comprehending Indian politics.

While conceding the undesirability of any all-encompassing theory that best explains Indian democracy, Jayal and Mehta argue that their task is limited to a scrutiny of ‘the myriad mechanisms by which this democracy has been sustained’ (p. xxv). Undoubtedly, Indian democracy remains something of an enigma both to the external and internal observer. It is indeed quite a rarity that states with similar indices of social and economic well being (especially when it started out in 1947) have been able to successfully sustain such massive projects of democracy. What best explains this? Quite clearly, there is no single overwhelming explanation for this but a combination of several factors that have led to the continued relative success of Indian democracy notwithstanding the interim of the Emergency years.