In Search of a Proto Theory of Political Order 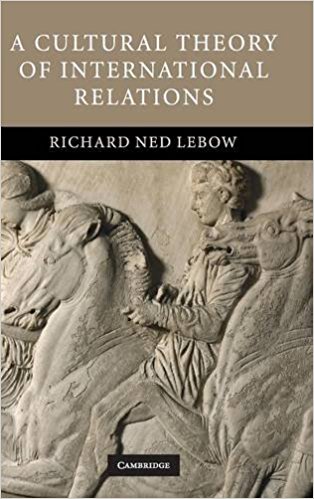 A theory of International Relations (IR) which purports to be cultural needs to grapple with at least three categories of problems.
The first concerns this whole business of grand theory. Dreams of a final theory, a set of immutable and fundamental truths about the universe which would explain everything that happens both in space and time, were seen even before Socrates. They have recurred from time to time over the succeeding centuries. But even the ancient Greeks saw the dilemma: if you want such a theory, then before you can know or explain anything you have to know everything. Add to this the agent-structure problem which is integral to and also as old as any grand theory (and still no nearer solution) and we are getting close to the conviction that the pursuit of this chimera is an exercise in futility.

More recently, of course, the postmodernists have cast serious doubt on the very credulity of any kind of metanarrative and expressed concern about the political agendas of those who propagate them. It is pretty difficult, then, to justify yet another attempt at a grand theory in any field, most of all in IR which already has so many of them.

The second category of problems concerns culture, two aspects of which may be mentioned. At one extreme there is the culture of relativist anthropology, important because that is where the culture concept really originated. Here culture is a package of material artifacts, mental and spiritual ideas, perceptions and so on, as also behaviour patterns, which package can be abstracted, taken out of context, so to speak, so that one culture can be compared to another. The colonial-political, not to mention racist set of ideas behind this make it difficult for a serious author to include it in any grand theory. At the other extreme are those like Clifford Geertz with ‘thick description’, the interpretive theory in which no culture makes sense outside its socio-historical and local context; that, of course, makes it rather difficult to compare one culture with another or, therefore, to construct a grand theory out of the concept.