What Ought to be History 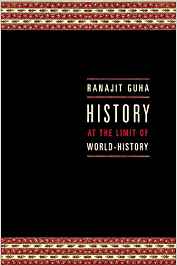 What Ought to be History
Rajat Kanta Ray
HISTORY AT THE LIMIT OF WORLD-HISTORY; THE HISTORY OF HISTORY: POLITICS AND SCHOLARSHIP IN MODERN INDIA by Ranajit Guha Oxford University Press, New Delhi, 2004, 309 pp., 650.00
January 2004, volume 28, No 1

History at the Limit of World History and The History of History are remarkable because of the somewhat eccentric views that the two authors, of very different persuasions, hold on what ought to be hisory. Aristotle, Hegel, Wittgenstein, Martin Heidegger, Jacques Derida, Jacques Lacan, Michael Bakhtin, Rabindranath Tagore et al are passed in review by Ranajit Guha, and Ranajit Guha, in his turn is passed in review by Vinay Lal along with an equally odd assortment of Hindu communalist historians and internet communicators of ‘Cyber Hinduism’ in the Silicon Valley, with Jadunath Sarkar, R.C. Majumdar and Bankim Chandra Chatterji thrown in for good mesure. The over-all impression is one of disjointedness, but there are some solid nuggets to be picked out in both books. Particularly useful is both authors’ discussion of what is meant by itihasa, a specific form of ancient Sanskrit literature. The Sanskrit name was adopted as the equivalent of the term ‘history’ in the vernacular languages of nineteenth century India. Itihasa, however, meant something else altogether in antiquity: a tale ending ‘so it was’ (iti ha asa).