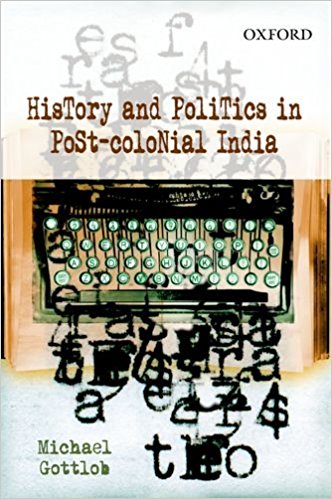 This book by a German scholar seeks to examine political viewpoints on the writing of the history of India, in promoting different ideas of what constitutes India as a nation, both in the context of what constituted a nation state in Europe and what could become the definition of a nation in a world of globalization. In the words of Michael Gottlob, stated in the Preface of this work:
What is at stake here is not only the instrumental use of the past by political parties and movements but also the general question regarding the usefulness of historical insights for political debates and issues. It is a theme which concerns citizens seeking advice and orientation from methodical research as much as professional historians reflecting on the practical contexts in which and for which their knowledge in generated.

In ‘Scientific and Political Claims in the Rewriting of Indian History: Stages of an Ongoing Controversy’, the author seeks to examine what he perceives to be the feeling of urgency, in the evolution and current interpretations of what India’s history is: Is it a history of her communities, that of class, that of region? What is interesting here is the author’s examination of research on what Gottlob calls ‘indigenous’ history, and of its collateral, ‘subaltern’ history, or history of the classes that constituted the bulk of India’s population but being subaltern in class were written about at best only as reference and not in any construct as part of a comprehensive whole. It is in terms of this that the author examines the historical ramifications of Hindutva, with its bearing on the developments that arose from the NCERT controversy in India, in the opening years of the twenty-first century and thereafter.