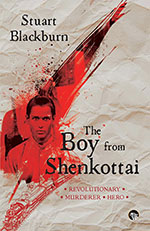 The major difference one draws upon when discussing history and fiction is that while history is based on facts, fiction is based on imagination. Given this context how would one describe a historical novel, which is a blend of history and fiction?  One of the normative responses would be that a historical novel is set in a period of history and conveys the social and cultural oeuvre of that period. This statement has undergone a sea change as the concept of history has altered in contemporary times. History attempts in the era of post-truth to repudiate the notion of reality and truth. Although, history still deals with the past it has attempted to denote varied interpretations of history.

With this background, it is interesting that Stuart Blackburn sets his novel during the time of British colonization in India.  There are not many works that discuss British colonization in South India. Except for some discussions regarding the influence of Gandhi and the Salt Satyagraha movement as well as the Vellore Mutiny, there have not been narratives on the radical movements down South.

Stuart Blackburn’s The Boy from Shenkottai sets right this lacuna by highlighting this incident. Blending together the past, colonial facts and fiction, the novel weaves the story of how a young boy from a Tamil Brahmin family is drawn to militancy as the pathway towards freedom. As per recorded history, Robert Ashe, an administrator was assassinated at a railway station between Tirunelveli and Tuticorin. The assassinator was a young man—Vanchinathan—who was later discovered dead at the spot.  The Hindu edition of June 17, 2015 carried the news item, ‘Ashe was shot on this day, 104 years back.’ The feature also carried an image of the bust of Vanchinathan at the memorial in Shencottai district.