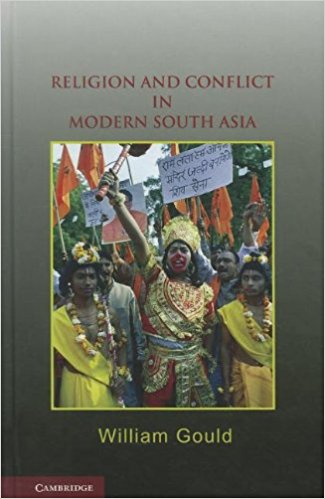 The running threat behind two centuries of violent community conflicts in South Asia is not religion, nor poverty or lack of education. The running threat is the peculiar nature of the South Asian State and the forms of political representation it has engendered. Thus argues William Gould in Religion and Conflict in Modern South Asia, an impressively erudite synthesis of various strands of research on two centuries of conflict—ranging from the 19th century cow agitations, the 1915 Sinhalese-Muslim riots in Ceylon to urban militancy in Pakistan and the contemporary surge of Hindu-Muslim violence in India. While conflict and violence have been preferred topics for social scientists studying South Asia, no one has ever attempted such a broad comparative study of the persistence of religious conflict during two tumultuous centuries. By integrating his own (archival) research on North India in the early 20th century with the work of a large number of other researchers, William Gould—a historian at Leeds University—succeeds in producing a coherent account of the interaction between the development of the State and the recurrence of community conflicts across South Asia.

While the book contains a (sometimes overly) rich range of arguments, its main contri-bution can be described as a further refinement of earlier constructivist accounts of religious conflict. Since the 1980s authors like Gyan Pandey have discussed how perceptions of reli-gious identity has changed over time as colonial administrators started to use prefabricated categories of ‘Hindu’, ‘Muslim’ or caste to ease their task of understanding and ruling a very heterogenous population that practised various syncretic forms of religion. As the British colonial rulers assumed the existence of relatively homogeneous religious communities having shared inte-rests, their policies helped to create the perception of a shared religious identity that was hardly present before. In particular, by interpreting and treating various different forms of local conflicts as instances of ‘communal’ conflicts they helped harden the sense of antagonism between religious communities.