Varied Hues of Ethics and Politics 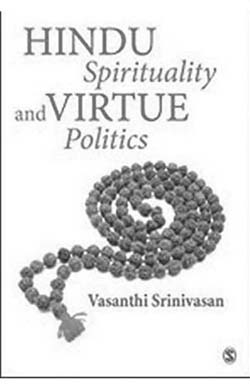 A political science professor at the University of Hyderabad, Vasanthi Srinivasan is clearly also at home in other disciplines such as philosophy, religion and history. The width of her engagement comes across in this slim book, which contains a larger text than what its thickness might suggest. Although this reviewer’s eyes were hurt by the book’s tiny font, that font compresses more than 500 words into each page.

The question the author pursues is an interesting one. Does Hindu spirituality enhance ethics in India’s national life? Does it help in making the polity more just and the citizen more responsible?
The question is interesting because for many being a Hindu is above all a matter of birth, of being born to Hindu parents or into the Hindu ‘race’. Most of the time ‘Hindu’ is only a noun; one is or is not a Hindu. It is only rarely that the word is used as an adjective. While a deed is seldom described as a ‘Hindu’ deed, it is a good deal more common to refer to a Christian act or an unChristian one.
For answers to her question, Srinivasan examines the lives and thoughts of four significant Hindus from the last century: Ananda Kentish Coomaraswamy (1877– 1947), Chakravarti Rajagopalachari (1878– 1972), Sarvepalli Radhakrishnan (1888– 1975), and Vinoba Bhave (1895–1982), to list them in the order of their birth, which is not the order in which Srinivasan presents them.
Born ahead of the other three studied in this book, and also dying well before them, Coomaraswamy, the famed Boston-based art historian who also earned a considerable reputation in metaphysics, receives most pages from Srinivasan. However, he is the last of the four thinkers interrogated, coming after Radhakrishnan, Vinoba and C.R., in that order.
The treatment of the four varies in kind. With Vinoba and C.R., the author tells us at least something about their lives while painting the hues of their Hinduism. On the other hand, with Coomaraswamy, who was born to an English mother and a Sri Lankan Tamil father from—so Srinivasan informs us—the high-ranking Vellala caste, and also with Radhakrishnan, Srinivasan’s focus is almost exclusively on ideas—on the contents of Coomaraswamy’s metaphysics and Radhakrishnan’s Vedantic Hinduism.
Tightly, knowledgeably and skilfully written, the book’s four essays do not lend themselves to simple comparisons or summaries. The author appears to find much civic value—or virtue, to use her phrase—in Rajaji’s and Vinoba’s folk-centred Hinduism, i.e., a Hinduism comfortable with the epics and Bhakti songs loved by simple everyday Hindus, comfortable also with the shrines and temples that these everyday Hindus visit, and comfortable as well with the human hopes, longings and weaknesses of such everyday Hindus.
This is a Hinduism that encourages thoughts of kindness, generosity, compassion and even justice in citizens. Srinivasan thus argues that the astonishing gifts of land during Vinoba’s travels across India on foot in the 1950s and 1960s were in part the result of his ability to connect the sharing of land to stories from Hindu epics. The rich and the poor alike responded to Vinoba’s appeals. Most of the land in fact came from small farmers, though there were spectacular gifts as well. If some of the land given was barren, and if other lands given were not distributed in time, that took only a little away from what, all things considered, was a staggering feat.
In his popular renderings of the Mahabharata and the Ramayana, in his widely read short stories, and in his public discourse over a long life, C.R. likewise underlined the simple virtues of friendship, goodwill and moderation. And of not being shocked when the big and even the great let us down, which in some ways is the essence of the epics.
Srinivasan points out that both Vinoba and C.R. were learned scholars well aware of a grand and metaphysical Hinduism which on occasion they also spelt out. In her view, however, their effectiveness flowed from their more frequent recourse to a more modest Hinduism.
The Hinduism of Radhakrishnan appears to the author to be loftier but also perhaps capable, for that very reason, to induce, smugness if not a sense of superiority in those subscribing to it. As for Coomaraswamy, whose metaphysics Srinivasan analyses with acuteness, she seems to finds him indifferent to the apparent injustice of a Hindu social order based on first principles, where low castes, dalits and women must remain content with their subordinate status, or at least so it would seem.
But I must not imply that Srinivasan’s arguments can be reduced to the remarks I have made. Her text is a good deal more complex and subtle. In places it is provocative, and likely to invite interesting discussions. On one point, however, there is no room for doubt or qualification. All the four individuals Srinivasan discusses offer a Hinduism that seems calm and secure. Theirs is a constructive Hinduism that does not require an external ‘enemy’ such as Christianity or Islam for its wellbeing.

Rajmohan Gandhi, a biographer and grandson of Mahatma Gandhi, is a Research Professor at the Centre for South Asian and Middle Eastern Studies, University of Illinois at UrbanaChampaign, USA.
Delhi.

Narratives Of Culture And Gender
April 24, 2017