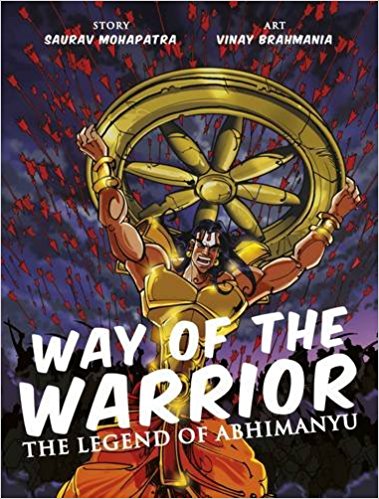 Upgrading the Mahabharata
Harini Gopalswami Srinivasan
THE WAY OF THE WARRIOR: THE LEGEND OF ABHIMANYU by Saurav Mohapatra Penguin Books, Delhi, 2014, 96 pp., 121
November 2014, volume 38, No 11

I cried. I cried a lot.’ says Saurav Mohapatra in the introduction, talking about his reaction as a young child, when he first heard the story of Abhimanyu. Most of those who grew up on the Mahabharata would identify with the experience.

Abhimanyu is the son of Arjuna, one of the five Pandava princes; and the nephew of Lord Krishna. He is also perhaps the most poignant figure of the Kurukshetra war: the brave, idealistic child who is trapped and killed by the Kauravas in a dastardly act. Kshatriya dharma is torn to shreds and trampled underfoot when six great warriors—Drona, Kripa, Radheya, Aswatthama, Kritavarma and the son of Dushasana—launch a concerted attack on the gallant sixteen-year old who has routed them all individually. It is a tragic story, difficult for a modern parent—with our shrinking from blood and violence—to relate to her children. But maybe that’s what makes an epic—stories that are unbearable, told and retold until the sharpness of the tragedy wears a little thin and makes it bearable. Timeless stories that, millennia later, still engage our sympathy, raise relevant points and pose interesting questions.