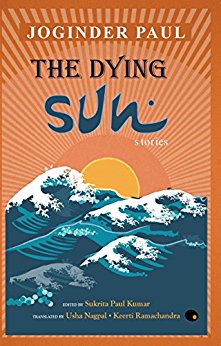 After reading a few young home-grown Indian English authors, switching to Joginder Paul’s short fictions in their English translation by Usha Nagpal and Kirti Ramchandran was like a breath of fresh air. Unlike the pseudo-political, faux-emotional and melodramatic ethos of those novels, Paul’s stories, woven in the warp and woof of elemental human emotions, soaked in earthy realities of life and presented in an effortlessly simple style have the ability to jolt the reader out of his sense of complacency and make him sit up and think about the general drama of pain and suffering that life is.

Urdu short story caught momentum in the wake of the rising social consciousness of writers during the Progressive Writers’ Movement and the Nationalist Movement in the hands of its maverick practitioners like Premchand, Sa’adat Hasan Manto, Rajinder Singh Bedi and others. This gradually was replaced by the emergence of Modernism in Urdu in the late fifties and early sixties whereby writers like Surinder Prakash and Balraj Komal dexterously used techniques such as symbolism and stream of consciousness to delineate the alienation of the modern man and the prevalent existentialist crisis in life.

Joginder Paul who belongs to this group, however, has distinguished himself by opting to write in a style which does not admit any extraneous pressure and shapes up in accordance with the inner dynamics of the story. As Paul says in his conversation with Sukrita Paul Kumar (included in the present collection), ‘…there are no hard and fast rules with which to work out a conscious use of means of a short story. The story should dictate its means and how they can appropriately be employed…a story must form all its features naturally from its own seedling.’

In his writing career that spans over half a century now, Paul has produced thirteen collections of short stories and several novels. He has been the recipient of several honours and awards which include the prestigious SAARC Lifetime Achievement Award, Iqbal Samman and the Urdu Academy Award. Paul’s innovative style and elegant simplicity, his uncanny ability to draw the reader into the lives of his characters, his intense characterization, his iconoclastic situations and his satirical takes on them make Joginder Paul one of the most compelling short story writers in India.

The book under review is a collection of 20 stories carefully and tastefully selected from Pauls’s anthologies by his daughter Sukrita Paul Kumar, a writer and poet of some caliber. These stories, diverse in their structure, thematic engagements, topos and character nuances pursue one common goal which is to untangle the complexities of human nature. The collection contains some very short pieces like ‘Jagirdar’ or ‘The Settled People’, which in spite of their brevity leave a long lasting impact on the minds of their readers. Jagirdar’s shocking demand for the full amount from a stranger on account of his daughter’s coming of age in the story ‘Jagirdar’ or the decision of the two lovers to settle down to marital bliss after having escaped Paul’s incomplete novel in an almost five-paragraph long story ‘The Settled People’ exemplify Paul’s fascinating experiments with the genre of the short-story. Incidentally, Paul has written quite a few stories in this form, which he calls Afsancha or short short-stories.

In stories where Paul draws his subjects from myths and legends, he invests them with new meanings by presenting them in an unusual shade. Paul’s ‘Heer and Ranjha’ are short of their romantic gloss and are now aged, seeking release through death as they are sick of being immortalized by people and being turned into a legend. Besides, there are stories like ‘Full Circle’ where the age-old theme of one generation ill-treating its previous generation and receiving in the same coin from the next, is used. Yet Paul’s style of tale-telling renders them interesting.

The topos of the stories in the collection is also widely varied, some set in villages, some in urban areas and one in America. The story ‘The Shelter,’ for instance is set in Tarapur village where two young ones belonging to different religions fall in love, igniting the fire of communal riots in the village which shatters the fabric of the village. It ends up taking their lives and forces village elders of a certain community to leave the village. The cries of the Mirasin add poignancy to the whole situation. The title story ‘The Dying Sun’, on the contrary is set in America. Dadu visiting his son and grandchildren in America is disdainful of the American way of life of his American born grandchildren.

Social critiques, as most of Paul’s stories are, morality is one of the central issues that they engage with. Many of them take a dig at the hypocrisy, specially related to sexuality, prevalent in our patriarchal society and expose the social conditions that cause breaches. In the story ‘Decorum,’ for instance, the marriage between Yograj and Rukmini is doomed primarily owing to the mismatch between Yograj’s procrastination and Rukmini’s ambitious ‘go-getting’ attitude. In ‘Hari Kirtan,’ the scorn of her husband and his relationship with another woman are reflected in Badi Bahu’s relationship with her ‘Hari Om’ chanting father-in-law Hari Kirtan.

Paul’s stories are interesting; his style of stopping short of any judgmental take on characters and situations makes them thought-provoking as well. The conversation between Paul and his academic daughter where Paul candidly untangles the knots of his writing style and his preferences, adds to the worth of the volume. Last but not the least, the judicious decision of the editor to add Paul’s ‘Self Obituary,’ (translated by Atanu Bhattacharya and Dipli Sakia), serves like a cherry on the pudding. The piece provides a panoramic view of Paul’s life tracing the ups and downs in it, familiarizing us with his philosophy of life in the process.

In all, the volume, which is not very ambitious in its scope, achieves what it aims to achieve, a delightful anthology for readers like many other such anthologies by Katha are.