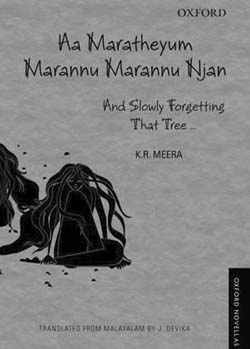 K.R. Meera’s And Slowly Forgetting That Tree begins with an innocuous everyday scene that turns rapidly unreal. Ten-year-old Radhika’s father leaves her at a bus-stop, to go take a leak— and does not return. It’s downhill all the way from there. The lapsed moment not only exacts a terrible toll from each of its stakeholders, but also sets them up for a lifetime of unspeakable trauma that has to be read to be believed.

Cut to the present, and you realize that this flashback is only the fig-leaf of an even more violent past. Through the narrative, Radhika, now in her thirties and a lawyer, will struggle to nip memory after brutal memory in the bud as they creep right back (not unlike the burgeoning green of the Kerala landscape the story is set in) and mock all her attempts at leading a life of uneventful ‘normalcy.’ Indeed, K.R. Meera saws right into the heart of all middle-class mores and refuses to offer even a glimmer of a resolution right up to the last page.
The narrative of And Slowly Forgetting That Tree oscillates between the 1990s and the recent past, redolent of the timelessness of small-town Kerala, where homes stand cheek by jowl with paddy fields and washing stones are testimony to an almost prelapsarian pace of life. Not only are there no obvious makers of technology such as mobile phones or the internet in this Sisyphean storyline, but time and space are also constantly splintered to convey a sense of never-changing continuum.
If this book distresses you with its repetitive loop of physical and emotional violence, it also opens your eyes to the impossibility of happily-ever-afters once tragedy has struck. Time does not heal; it only covers with temporary scabs. The past might pale for a while, but will not lie low for long. Radhika may strive to soldier on, straddling home, hearth and career, but sure enough, another piece of her past will saunter in just like that and bring it all crashing down again. Escape is impossible, as is erasure; every painful memory seems programmed to set off an error chain of other such memories, and every random act of kindness will demand its pound of flesh in turn.
Sharing story-space in And Slowly Forgetting That Tree is Radhika’s college mate Christy Isaac, whom she first meets in the unlikeliest of circumstances. A mythical Krishnan to her Radha and Majnu to her Laila who seems to offer something akin to hope and redemption, Christy exits Radhika’s life as explosively as he entered it. Only to stage his Second Coming a full sixteen years later and in radically altered circumstances. In a conspicuous Biblical allusion towards the end, Christy implores: ‘You don’t know. I ran away for your sake,’ he said. ‘To atone for your suffering. I was taking on myself all the evils that were done unto you. I was crucified for them. My palms have marks where the nails were hammered. My feet, too. A crown of thorns has melted into my head … all for your sake …for all the evils that the world did to you … but was that the solution? … My tears on your head. Radhi, your baptism with my tears …’ (p. 69)
And thus unfolds a dense drama in the shade of the eponymous tree of its protagonist’s innerscape. It is telling that as a ten-year-old left waiting for her father, Radhika is raped by a woodcutter who tears into her ‘like a hacksaw tearing into wood’ (p. 5). The sharp scent of raw wood and the thwack of the axe continue to haunt her ever after. It is equally intriguing that the words in Malayalam for forgetfulness, maravi, and numbness, maravippu, share roots with the word for tree, maram.
Radhika’s relationship with Christy is ‘like a lightning-struck tree’ (p. 9); their love is at once ‘a poisonous thorn’ with ‘roots that sink deep into the bones’ (p. 54) and ‘a strange plant’ with ‘arousal in its leaves’ and ‘ecstasy in its roots’(p. 41) that ‘puts out new shoots, even if cut and decimated.’ (p. 72). Even the lodge where Christy stays is called, well, ‘Woodlands’! When Radhika recounts every tiny detail of that fateful day at the bus stop to Christy a decade later, she draws upon ‘a huge memory-tree.’(p. 18) Urged to give vent at long last to her bottled-up feelings, she can only say, wooden and benumbed, ‘There’s something blocking my tears … a fallen tree.’ (p. 21) When, putting the past behind her, she tries to rebuild her nest with Ajit, Radhika realizes that alas, his is ‘A terrible love. It wanted the shade and the fruit. But it did allow roots and branches.’ (p. 36). Ajit’s relentless and indiscreet interrogation into her past fells her spirit all over again and their marriage dwindles into yet another ‘strange tree’ that ‘sprouts from fallen leaves, fallen branches, fallen fruit’ (p. 39). In utter turmoil after her re-encounter with Christy, Radhika suddenly hears the inexplicable thud of a tree being hacked down. ‘There were no trees left in the paddy field. Who was chopping nonexistent trees? … Slowly it dawned on her … it was her heart, pounding’ (p. 32).
In her Translator’s Note titled ‘The River of Fire’, J. Devika memorably compares K.R. Meera’s writerly prowess to that of a bricklayer’s. ‘Like a skilled mason laying jagged, sharp, pointed pieces of broken glass on top of a boundary wall, Meera builds this text with short, sharp, sometimes broken, and often ironic or outright sarcastic little sentences designed to draw blood’ (p. xvi). While the novella is itself an ideal vehicle of such high-voltage emotion as would be impossible to sustain in a longer or shorter format, it is to Devika’s credit (and perhaps her editor’s too) that she manages to convey this improbable razor’s edge of language for the most part in her equally terse translation. And Slowly Forgetting That Tree is K.R. Meera at her darkest dystopian best, and certainly not the kind of story you’re likely to forget, slowly or otherwise.