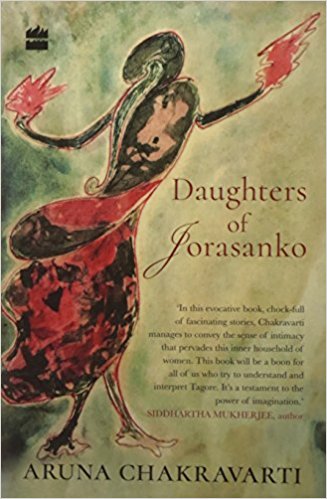 Daughters of Jorasanko, the recent novel  from Aruna Chakravarti, reasserts her position as a perceptive and sensitive writer. Though written as a sequel, it does not lean on Jorasanko, but asserts its independence in its totally different tone, mood and pace. The female characters in Daughters of Jorasanko vividly reflect a change from the previous generation of women in Jorasanko, and it is more evident in the third generation of Ranu and Nandita, so much so that a comparative study of the women in the two novels might be an interesting project to undertake. The daughters, Beli, Rani and Meera, represent a patriarchal social conditioning that oppresses them whereas the next generation of Ranu and Nandita have a certain exuberance and liberation in their body language, challenging the rigid norms of patriarchy, and even bringing a change in Tagore’s hitherto conventional thinking.