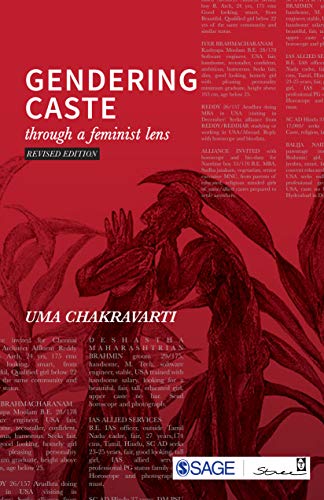 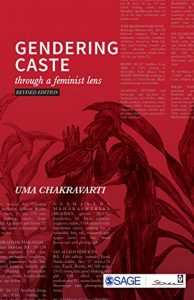 This is the revised and updated edition of a book originally published in 2003. Maithreyi Krishnaraj’s ‘Note from the Series Editor’ introduces the volume and places it in its context, while Uma Chakravarti’s ‘Afterword: Caste and Gender in the New Millennium’ provides a penetrating discussion on POA (Prevention of Atrocities Act, or more fully, ‘Scheduled Castes and Scheduled Tribes [Prevention of Atrocities] Act 1989’. Together, they provide a valuable addition.

Uma Chakravarti’s book is an indispensable volume for students and scholars of both feminism and caste. The author explains why and how feminist theories and feminist perspectives in India have to be founded on two axes of women’s subordination: that of class, which is a universal axis of subordination, and caste, ‘a form of stratification unique to India’. This twin perspective undergirds Chakravarti’s analysis and her conclusions. The persistence of caste as a defining factor in the subordination of women, and its expression in the form of violence as a weapon of such subordination, forms a major theme.

It is at once revealing and alarming to recognize the paradox that women are both victims and abettors in this subordination. The power that drives women to be their own ‘worst enemies’ is the inexorable and historically entrenched caste identity. Relying on extensive research, Chakravarti demonstrates the iron grip of caste hierarchy on women of the upper castes. She paints a grim picture of their submission to both the normative and the existential demands of their caste-based communities. That woman within the citadels of privileged castes would endure domination, subordination, and indignity in various manifestations only to cling to their caste identity and belonging shows why the prospect of losing one’s hierarchical caste position continues to be so frightening in Hindu society. It also shows why Dalits and rational-minded Indians would want the vicious caste system to be challenged at every step, whatever it takes, so that it is dissolved once and for all.

What is this connection between caste and gender, and why does it have a seemingly indestructible hold on Indian society? I say Indian, and not Hindu, because the toxicity of the caste system affects all Indians, regardless of their religious or secular affiliation. Chakravarti’s study is devoted to answering just those questions. She does so systematically, using history as the vehicle.
Chakravarti presents the complex and confounding process by which caste has become so entrenched in Hindu social life and, consequently, such a powerful (and often violent) tool in the subordination of women. In laying out this history, she shatters common misconceptions. ‘Pre-Colonial Structures of Caste and Gender: an Eighteenth-Century Example’ is an important chapter, where she states her thesis that it is essential to question the ‘valorization of pre-colonial indigenous structures’ as if those structures had ‘an in-built self-correcting mechanism which ensured that these structures were never too oppressive’.

‘Critiques of Caste and Gender Stratification’ is so very informative that a whole monograph could be written using the background material that Chakravarti provides in the form of references. It is from such fact-based research that influential books in the social sciences are written.