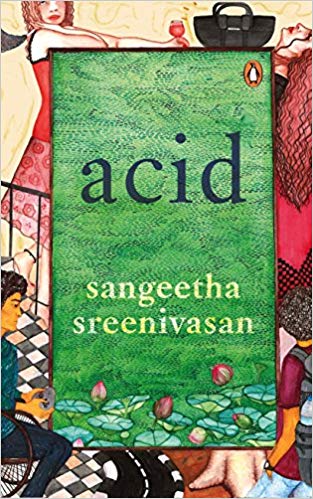 There couldn’t have been a more appropriate title for Sangeetha Sreenivasan’s tale of lesbian love, and the demons it unleashes—in the mind, and within that tenuous network of bloodlines called family. Acid is the euphoria of lovers in an embrace; it is the psychedelia of fragile relationships; Acid is the agony of separation, and the paradoxical ecstasy of unravelling, of wasting away, of turning into a shadow. That the bilingual author translated her own work from the 2016 Malayalam original, which won the Thoppil Ravi award in 2017, perhaps quells one’s curiosity (and occasional astonishment) about the jagged narrative arc of this novel, which swings back and forth in time, welds reality with dream sequences and hallucinatory trips, allows one to peek and pry into the lives of its characters as they share their bodies, their music, their food, provides a sudden authorial summary of events, and often does exactly as it pleases.

At the very outset, Acid attempts to beguile with the description of an erotically charged dream: ‘She lies naked and flat on her back in a lotus pool that surpasses the stillness of Monet’s beloved ponds. The water in its greenness brushes against her nipples. The woman in her greenness shoots a hurricane of madness upwards to the window that opens to the south of the winds.’

A languid opening, which disintegrates the moment the dream vanishes. Aadi, one of Kamala’s biological twins, has woken to the sound of Kamala fighting with her lover, Shaly. ‘Aadi heard Kamala scream across the room and the sound of something being knocked to the wooden floor. The room shook, and somewhere at the back of the house plaster came off the walls.’ This is typical of Kamala and Shaly, the female protagonists of Acid, whose intertwined lives alternate between savage lovemaking and fighting. They have met on a package tour to a temple town, during which Kamala delves into Hindu mythology to explain the overt sexuality of the stone sculptures on the temple walls, to young and gorgeous Shaly. They live together in a two-storied house in Bangalore. Kamala is an LSD junkie. Her twins from her marriage to her cousin Madhavan—Aadi and Shiva—live on the lower floor of the house. Boundaries are clearly established in this subversive household: ‘The women were free to come down whenever they wanted. But the boys were not allowed on the upper floor.’