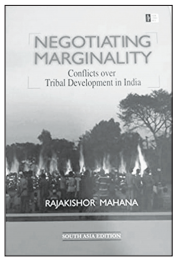 Tribal societies are marked by contestation, competition, movement, conflict, etc., in the contemporary period. These concerns are mainly revolving around the question of livelihood and survival of tribal communities. Their livelihood and survival largely depend on land and forest, known as ‘two pillars of the tribal economy’ and the ‘philosophy of the tribal life’, especially the former. Hence, they have developed a symbiotic relationship with land and forest. Meanwhile, any attempt to disrupt such relationship would not go uncontested and unresisted. As a result, tribal communities have spearheaded various movements in different degrees, forms and levels in different parts of the country. Such movements have become more prominent in the 1990s due to the hollowing out of the state and increasing involvement of multinational corporations in extracting natural resources from resource rich tribal areas.

Within this backdrop, the book under review, is an ethnographic account of five distinct but inter-related tribal movements in the eastern Indian State of Odisha. These movements are the anti-Tata Steel movement in Kalinganagar of Jajpur district, anti-Utkal Alumina International Limited movement in Kashipur of Rayagada district, the Save Niyamgiri movement in Rayagada and Kalahandi districts, the Save Gandhamardan movement in Paikmal of Bargarh district, and the anti-land alienation in Nabarangpur district that have emerged as movements for dignity, freedom, and livelihood of tribal communities (p. 6). The field insights were drawn with the ethnographic toolbox, such as participant observation, interviews, case studies and life histories (p. 29). The book provides ground experiences with sociological, political, cultural and economic aspects of marginalization of tribal communities, critical role of the state and of multinational corporations.