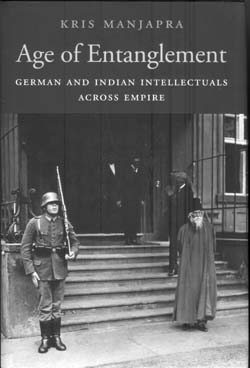 Kris Manjapra’s Age of Entanglement is a worthy and comprehensive study of the transnational engagements between Germans and Indians, from the nineteenth century to the Second World War, when both nations were trying, in their own ways, to free themselves from British hegemonic control. Of course, Manjapra is quick to point out, and rightly so, that though there might have been a common axis for the Germans and Indians to come together, i.e., their opposition to British domination, this exchange can hardly be thought to be between equals. Therefore Manjapra hopes that his exploration in this book will ‘inject a necessary dose of realpolitik into the study of transnational intellectual history, through a focus on alliance building, political rivalries and multilateralism’ (p. 6). Consequently, Manjapra examines the political and intellectual coalitions beyond Europe —with Indians in this case—which helped critique the nineteenth century engineered universalism, that of the Enlightenment of Europe and the Empire.