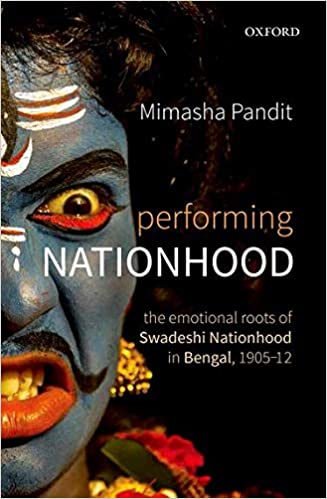 Instead of newspapers, books, journals and pamphlets that documented the development of the Swadeshi movement in Bengal during the first decade of the twentieth century, can the idea of nation or nationhood be interpreted through the intricacies of performative mechanisms?  This is the major question the book under review poses and attempts to answer in the affirmative. In offering a critical analysis of the process of development of an emotional bond among the people of Bengal during the Swadeshi era, the author pays close attention to the three most popular performative media in Bengal—theatre, jatra, and songs. Limiting herself to a very short time span of seven years, between 1905 to 1912, she tries to map the patterns of modification introduced in the performative techniques by Swadeshi performances.

This has enabled her to unveil the intricacies of the interaction between sentiments, emotions, and ideas and contemporary political discourse, and the eventual development of a Swadeshi nationhood. During this era, popular media was clipped to fit the nationalist frame. The change made an impact on the process of theorization of culture. Even though volumes of documents were ordered by the colonial government on the performances by the natives, they were kept secret and confidential.