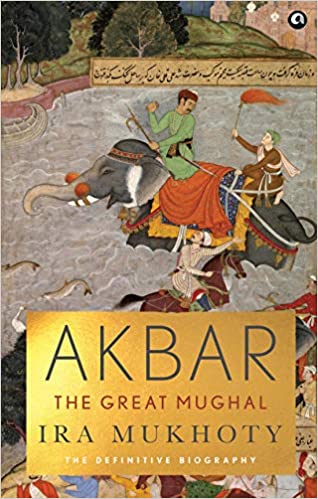 ‘A definitive biography’ is how author Ira Mukhoty introduces her work. One must concede Mukhoty’s assertion that there isn’t much in terms of biographical accounts of the medieval Indian monarchs. For those looking to read into the lives of these kings and monarchs whose actions have had a profound impact on the historical trajectories of the South Asian past, biographical overviews have been few and far between. The author is also to a large extent right that this reluctance on the part of professional historians to look at the mega picture has conceded space to imaginary accounts of the lives of these kings. However, the concern is, to what extent  the ‘biographical approach’ be a useful historiographical tool. The economic, social and gendered narratives of the past have gone past histories centred around personalities and their actions.

The work is divided in six large sections chronologically around the events of Akbar’s life. Each section is further sub divided in an almost episodic manner, to focus on events which highlight political encounters, administrative shifts, military expeditions, commissioning of grand projects of art and construction, birth of Imperial princes, religious interludes, amongst others, all woven into the grand narrative arch of Akbar’s life story.

The author is at her best when she is speaking on the role of the women—wives, mothers, sisters and attendants to imperial princes. The elaboration of the role played by the ladies of the royal harem in the conduct of the affairs of the nascent state as well as in the conduct of the daily affairs of the Court is worth reading. The navigation of the treacherous world of the Timurid political world would have been difficult for the padshah but for the role of the ladies of the court. The off-the-cuff remarks on paintings and cuisines, details of diet, serving, and food choices, serve as an interesting backdrop to contextualize the world of the Mughal princes and their attendants.