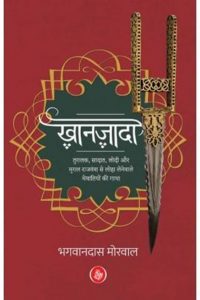 Past is a land of possibilities—creative, discussive, interpretive. The seductive aura of its myriad ifs and buts has always kept creative imaginations in thrall. Novelists have often latched on to its narrative possibilities to augment their fictionality and make a meaningful intervention in the present.  Bhagwandas Morwal’s novel, Khanzada, a creative-imaginative take on the history of Mewat, is ostensibly informed by this novelistic inspiration and aspiration.

Morwal’s is a unique voice in Hindi literature. Through his novelistic milestones like Kala Pahad, Babal Tera Des Mein, Ret and Halala among others, he has continuously replenished the Hindi fictionscape with the sights, sounds and sensibility of Mewat at the cross-section of tradition and modernity. While retaining his distinctive signature, Morwal, through his latest novel Khanzada, has added yet another layer to his organically evolving narrative oeuvre on Mewat—a slice of history. The Khanzadas of Mewat were Muslim Rajputs who ruled over Mewat with its capital at Alwar. Descendants of Raja Sonpar Pal, a Yaduvanshi Rajput, they had converted to Islam during the reign of the Tughlaqs. Hasan Khan Mewati was an important figure in this history of Mewat.

A combination of the popular, dramatic and the colloquial, the narrative of Khanzada spans almost four hundred years to chronicle the life and times of Mewat. It retells the tale of those Mewatis who had bravely engaged with the Tughlaqs, Saadats, Lodhis and Mughals. It also makes available for its readers the underlying dynamics of what is popularly known as Ganga Jamuniya tehzeeb, the terra-firma of Indian syncretic culture.