Topping The Edge of Imagination 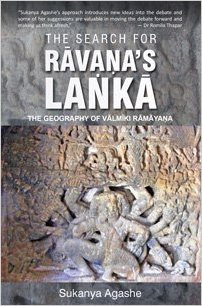 Sukanya Agashe’s attempt to definitively locate Lanka and to establish a physical geography for the Sanskrit Ramayana covers an astonishing amount of ground, literally and metaphorically. Her documentary research is meticulous and wide ranging, her physical journeys and empirical investigations equally so. As a result, Romila Thapar can say in her blurb to the book, ‘Sukanya Agashe’s approach introduces new ideas into the debate and some of her suggestions are valuable in moving the debate forward and making us think afresh.’

To my mind, there are two debates here: one about the actual physical locations, for example, is Valmiki’s Lanka the geographical island of Ceylon or is it a mountain surrounded by water in a region on the mainland, in a place that we now call Jharkhand? Is Kishkindha the area that surrounds modern-day Hampi or is it a place further north? For some reason, these questions have engaged scholars for centuries in much the same way that hundreds of thousands of grey cells have been spent locating the battlefields of Homer’s epics.

To a large extent, such research contributes to the historicization of epics in simple terms, supporting the argument that the events in these marvellous stories, however complex they may be with flying monkeys and aerial chariots, did actually happen. On the other hand, in a more nuanced and  gently speculative way, such research allows us to have greater empirical knowledge of the lay of the land at the time when these stories were compiled. We learn something about how the ancients knew the lands they occupied and how they thought about the lands that surrounded them. In the same way, these texts can be seen as  reflecting some part of how polity and society were structured and operated.

The second debate is the one that discusses how we see and understand these texts themselves and therefore, the information they contain: are these texts meant to be ‘historical’ at all or, do we treat them as delightful flights of fancy and fantasy, products of an unfettered human imagination that chooses to express itself in metaphor rather than in facts? Is Lanka an island in the Indian ocean or a place in the poet’s mind where the restraint and virtue of Ayodhya is turned on its head and becomes ostentation and indulgence?

Further, one of the indications of how deeply the story of Rama pervades lives and hearts in India is the fact that it has generated thousands of sthalapuranas, local stories that tell us that Rama and Sita stayed the night here, or that Lakshmana shot an arrow into the earth there to create that stream, or that Sita dropped her jewels at this very spot when Ravana was carrying her away. We all want the Ramayana to be close to us, for some part of it to have happened just around the corner from where we live. So translating the expansive sacred geography of the text (which allows it to be everywhere at the same time) into the narrow confines of actual mountains and rivers and lakes seems an exercise in futility—wherever you tell me Mount Mahendra really is, I know that flattened heap of stones outside my village is the place from where Hanuman took his great leap across the ocean.

Having said that, Agashe’s enterprise and her determination to get to the bottom of things, as it were, is admirable. She has plumbed all kinds of sources, from later indigenous geographies in Sanskrit to colonial gazettes to the works of 19th and 20th century Ramayana scholars, to images from Google Earth. Although her style of writing is less than mellifluous, she manages to convey her information and her hypotheses with passion. Since the publisher has chosen to go with diacritical marks for Sanskrit words, it’s really irritating to have those msiplaced and flung around carelessly. The book would have been served better by eliminating these marks altogether, given that those of us who would want to read it know these words and names pretty well already.

I will leave the final word on geography with the Valmiki Ramayana itself. When Sugriva calls upon the hundreds and thousands of monkeys at his command and divides them into bands that will search for Sita in the four directions, he describes to each group the lands that they will pass through on their search. Here’s an example to what he says to the monkeys going EUncommon Rulersast, led by Vinata. ‘Go to the lovely rivers Bhagirathi, Sarayu and Kaushiki, to the Yamuna and the mountains in which it rises, to the Saraswati, the Sindhu, the Sona with its water that sparkles like jewels, to the Mahi and the Kalamahi with their hilly and wooded banks. Search in the kingdoms of Brahmamala, Malava, Kosala, Kashi, in Magadha’s great villages, in Pundra and Anga. Look in the regions where the silk worm is bred and where silver is mined. Look in the hills of Mandara, where there are people with ears that cover their bodies, and people with ears that hang below their lips, and people whose faces seem to be made of iron, people how move quickly on one leg and people who eat the flesh of men. Look where the beautiful golden-skinned hunters with ornaments in their ears live, and where the island people who hunt and eat raw fish live. And among those who live under water and are called human tigers. Search the hills and the forests there!’

Yes, we do start with a geography of recognizable places, but that’s not where we stop. Agashe’s book takes us only to the edge of the imagination—what lies beyond is far richer than any map could be.

Arshia Sattar has a PhD from the Department of South Asian Languages and Civilizations at the University of Chicago.