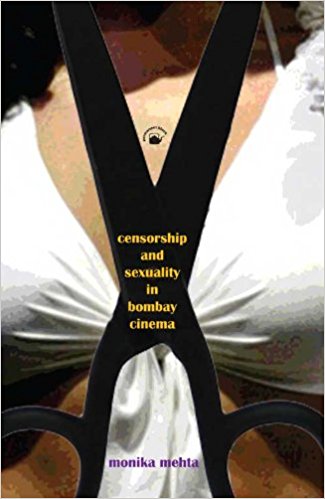 Right from the cover the book unfolds a discussion on the role of censorship and debates around the context of spectatorship of Bombay cinema. The designer Anuradha Roy has very artistically and craftily used images that may look vulgar and obscene and need scissors to curtail such depictions for the mass spectator. If one notices the jacket carefully, the publisher’s name Permanent Black figures like it has defined the stability of such psyche existing within the domain of the socio-political scenario of India. To be precise, the semiotic representation of the metaphor of sexuality and censorship has been highlighted very aesthetically.

The blurb summarizes the topics dealt with in the book—from constructing the female body and sexuality in comparison to the national identity that has been thrust upon women and their role in the name of political culture and social convention. Mehta also focuses on the role of media in enhancing this debate of the imposed role of femininity, taking examples of four different films of different genre.