Theory and Practice: A Good Mix 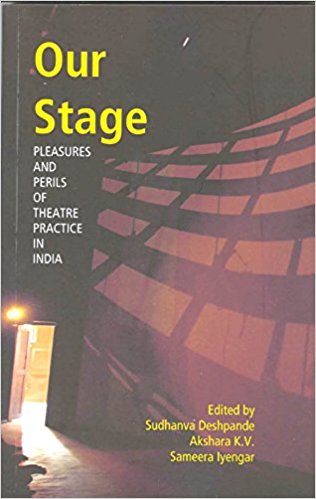 This book grew out of a seminar organized in March 2008 by the India Theatre Forum, which had the idea of bringing together a
large group of theatre persons, academics, activists, thinkers and critics, and permitting them over three days to talk about issues relevant to India’s theatre today. The book is not a record of what was said, nor does it mediate the many different views that found expression. The themes around which the discussion was directed are broad and inclusive, giving room for the diverse participants to bring their particular views and experience to bear, and to promote interchange. A point of reference for the meeting was a seminar held under official auspices in 1956, at a time when newly constituted official organizations were seeking to encourage theatre activity, though half-a-century later many of the concepts of the earlier meeting seemed questionable. The present seminar brought together some towering figures from fields only tangentially related to theatre, as well as practitioners who live in, and on, theatre. It was a rich mix of stage, politics, sociology, history, cultural theory, poetry, dance, folk drama, journalism, design, publishing, and more.

Thus the seminar covered a wide range of subjects but yet in some ways it was confined to a restricted canvas, for the unifying thread, if there was one, was essentially ideological. In general, the participants were drawn from the Left, with largely shared values and beliefs about society and politics, and the direction that social action must take. Themes that preoccupied many of them include matters where society needs a jolt, such as issues pertaining to marginalized sections like dalits and women, and questions of identity and struggle. At the seminar, theatre tended to be approached through this route of activist reform—it is no accident that Lenin was invoked more than once. Indeed, for some of the participants, theatre seemed to be valued essentially as a means of social education and reform, within a larger movement for social progress. Hence the categories set out in the earlier seminar of 1956, like folk, traditional, modern, appear irrelevant if not mistaken. Aestheticism, many felt, had nothing to offer, for the task was to come to grips with social realities—also political realities, witness the forceful criticism of the rule of Narendra Modi in Gujarat, and of the Government’s handling of the Bhopal tragedy, the cyclone in Orissa, and the incidence of suicide among farmers in Karnataka.