The Wretched of Our Cities 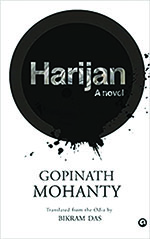 The troubling question in writing about Harijan, both the original Odia novel by the renowned Gopinath Mohanty as well as its meticulous and detailed English translation of the same name, is this: how does one write about an event in which the experiencing person is the one who has contributed directly to the degradation of a fellow human being? The question may be put in a more direct way like this: how does one write about a people whom he/she, enabled by a caste-differentiated social structure, has literally consigned to ‘to a level lower than the lowest beast’ (p. 86)?

A corrosive poem by Dalit Odia poet Basudeb Sunani writes back to babu society, giving a bottoms-up view of the so called high-born who blithely void excreta upon fellow humans even as they posture and pontificate in public.  It will surely be a self-defeating and dubious literary exercise. When it comes to Harijan, it has to be admitted that the writer, the translator, and the present reviewer find themselves ranged on the same side as ‘savarna’ oppressors. For they have, at some point in their life, benefited from the obligatory menial work of scavenging (read shit cleaning) that the low born perform for them only to be damned as untouchables and condemned to perennial ‘social distancing’. If one finds this too hard to digest, let them only read the searing description of the scavenging work that the low born actually do.

Almost every house had a ‘khata paikhana’ or ‘dry latrine’ at the back, which had to be cleaned manually by a mehentrani once in three or four days. It was a tiny, windowless, airless shed with a floor that was raised at least three feet off the ground and had a hole in the centre over which the user squatted. The waste dropped into a bucket below and when it was full, it was dragged out by the mehentrani, cleaned, and put back in place. With her bare hands she scooped out the excreta out of the bucket into her basket and carried it on her head to the cart which would transport it to the dumping-ground far away from the city. The mehentrani entered the pit through a trap-door at the rear which had to be lifted by another mehentrani (p. 89).