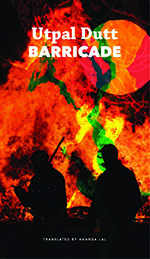 The history of twentieth century Indian drama has hitherto focused mostly on the work of playwrights such as Girish Karnad, Badal Sircar and Vijay Tendulkar. The enormous work of Bengali writer, actor and director, Utpal Dutt (1929-1993) has hardly received the appreciation due to it. Ananda Lal’s recent English translation of Utpal Dutt’s Barricade has shifted the spotlight to the vast oeuvre of his work as also to the absence of sustained discussion around it, especially to a non-Bengali reader/audience.  Utpal Dutt wrote twenty-two full length plays, fifteen poster plays, nineteen Jatra scripts, acted in thousands of shows, and directed more than sixty productions. He wrote widely on theatre and cinema and acted in about a hundred Bengali and Hindi films, winning the National Film Award for Best Actor (Bhuvan Shome, 1970) and the Filmfare Best Comedian Award three times.

Barricade was performed by Dutt’s own theatre group, People’s Little Theatre, on 25 December 1972. The play was published in 1977. Ananda Lal’s translation of the play is based on three texts—the 1977 publication by Jatiya Sahitya Parishad, Kolkata, the play as it appeared in the fifth volume of the Natak Samagra published by Mitra and Ghosh, Kolkata in 1997, and the 1995 telecast of Barricade by the Central Production Centre of Doordarshan. Lal had sub-titled the play in English for Doordarshan. A detailed introduction covers various aspects of the play such as its historical relevance, the texts used and the process of translation. The use of the video performance as text along with the published texts lends new meaning to the play and makes a case for a new methodology in translation practice. This is the fiftieth year of Barricade and the play has been recently revived and directed for the stage as a 150-minute production by the Bengali theatre director Debesh Chattopadhyay.

Special mention must be made of Lal’s footnotes to the play. Lal explains his choice of words in the course of translation, the way in which the three texts differ in subtle ways from each other and the visualization of the script in performance. For instance, in the stage directions the characters present themselves on stage as ‘cartoons’, and the notes explain how they appear as ‘cardboard cut-outs in the video, with openings through which they place their heads and hands. Providing a cultural context, the footnotes create a sub-text as they draw attention to Dutt’s use of history.