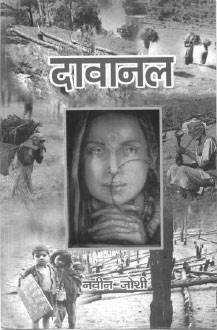 This is a novel by a journalist which is certainly an advantage. The journalist is always present inside the novelist and knows well that his opting for story telling is driven by his urge to catch and tell facts that are beyond the reach of journalism. This understanding gives Davanal a distinct tinge and flavour.

The novel deals with and brings forth an issue, with which our times, as well as we, as individuals, are deeply concerned. Our times have become unbelievably crazy about information, and the world of print and electronic media, in its various manifestations like dailies, weeklies, monthlies, supplements, 24×7 radio and TV channels, that have become so overwhelmingly powerful and yet meaningless. The novel looks into this virtual world and its clandestine ways and means, its driving forces working from behind the scene with vested interests, and its ultimate targets or victims.

Though the central theme of the novel is apparently the peoples movement against the indiscriminate felling of trees, it deals with a much deeper and blacker tragedy. Neither the felling of trees for this or that reason or without any reason at all; nor the consequential denudation of mountains and the resultant landslides causing blockade of the stream of Bhagirathi, transforming her into a huge lake; nor the sudden sweeping flood through a wreckage in that lake that brings multiple deaths and massive destruction, is so pathetically and ironically tragic as the hope in the hearts of the helpless, aggrieved survivors on seeing a helicopter hovering over their heads.