The Trajectory of Chiaroscuro 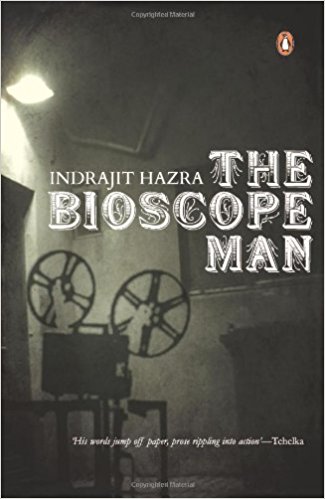 The movie begins with a regurgitation of not just a half digested Bengali breakfast but also a foreboding of tragedy. Did I just say movie? Indrajit Hazra’s The Bioscope Man may well be a movie, which has been cinematographed in words, for such is the dexterity with which he casts his characters and rolls out his scenes.

In The Bioscope Man, Hazra’s third novel, a tragedy of divinely imposed comedic errors, traces the life of an actor in what was a precursor to the movie industry—the bioscope. And in it, he displays the shadow play of reality versus dream world (in this case reel world) with even greater lucidity and finesse than in his first two novels.

The Bioscope Man is the longest and most ambitious of his three books, but Hazra does not disappoint. Far from it. In fact he proves without a doubt that this country can produce English writers in whose hands the language is a hundred-eyed beast, shimmering with myriad coloured scales, tamed and trained to turn reading into a fast moving motion of coherently flowing images.

The novel opens with Tarini Chatterjee, senior employee of the East Indian Railway, who while waiting with his colleagues consumes many morsels of singaras and jilipis at the railway station. The occasion is the inaugural of the spanking new Howra Station. The year is 1906, and Tarini is part of the celebratory entourage that will board the first train which will also carry his British boss Edward Quested and his teenage daughter Amelia.