The Story of the ConscienceKeeper 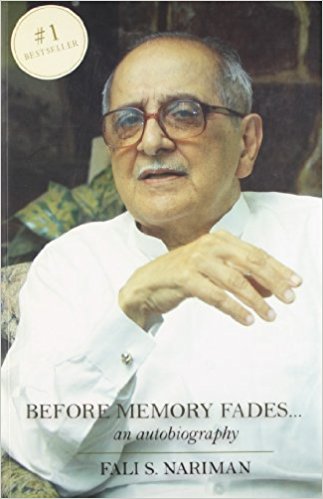 Fali S. Nariman is an eminent Senior Advocate of the Supreme Court of India with a legal career spanning six decades. Having come into practice immediately after the adoption of the Indian Constitution he has grown with it to be one of its foremost experts. The book is styled as an autobiography and one starts with the hope that it would give insights into the titbits of the life of Mr. Nariman, a most revered figure in the Indian legal firmament.

Always remember, Fali, it is better to spend more time thinking about a case than merely reading the brief, Nariman recalls the advice of Chandubhai (C.K. Daphtary, former Attorney General of India). The chapter on legal practice meant for young lawyersLessons in the School of Hard Knocksgives advice on various techniques of practice and fundamental mistakes in court rooms that one must avoid.

About Sir Jamshedji Kanga, the doyen of the Bombay bar, under whose pupilage he trained as a lawyer, Nariman speaks most lovingly. He also gives the reader a good feel of the buzz in Kangas chambers in the 1950s and practice in Bombay High Court in those days (More Watching Than Pleading). Many young legal practitioners draw solace from the experiences of an eminent lawyer narrated in his biographical accounts about his early days in practice. Though Nariman is a first generation lawyer, he does not share with the reader his pains and frustrations at the Bar during his early years.

The book tries to follow a chronology in the sequence and title of the chapters: his initial phase in the Bombay bar, his Move to Delhi, Emergency, Some Reflections: Post Emergency, while taking the reader through a discussion of the epochal constitutional casesGolakh Nath, Kesavananda Bharti and ADM Jabalpur cases.

The most fascinating depiction of Narimans intellect in the book is the chapter on About Some Judges of the Supreme Court. He remembers the history of the Supreme Court by two different erasthe Subba Rao era and the Krishna Iyer era, by the names of two preeminent judges of the Supreme Court and discusses their various decisions and styles. No doubt Justice Rao and Justice Iyer were judges with powerful intellectsone pulled the Court to the right and the other to the left. However, identifying their times with their individual personalities may not do justice to the contribution of many others and their varying approaches to deciding cases. This chapter should be a strong provocation to legal academics. In the later part of the chapter, Nariman gives a pick of his other favourite judges on the benchJustices Hidayatullah, J.C. Shah, A.P. Sen, D.A. Desaithe list being quite varied, fascinating and unexplainable.

Although in the book there are two chapters devoted to judges (the other being Judges Before and After My Time), there isnt one that is devoted to great lawyers. Nariman seems to have a special place for judges in his heart and leans towards handing more and more power to them (see chapter on Judicial Governance and Judicial Activism); may be we could do with less reverence. The Supreme Court has had its share of black sheep and Mr. Nariman merely has a few barbs reserved for them. Interestingly, some such judges, who have had long careers in the Supreme Court, have been admonished by not making any references to them. Stories about lawyers are spread all over the book laced into his analysis of cases and events.

The book reveals that Nariman, despite his fascination for judges, declined judgeship both the times it was offered to him at different points of his career: once to the Bombay High Court and the other to the Supreme Court. Charmingly, he dismisses the idea of he being a judge by stating, I comforted myself with the reflection that I too would not have made a good judge. He further tells us that he declined the offer of being the Attorney General from Atal Bihari Vajpayee in the year 1998 because he did not want to be a part of a BJPled government. Later, in 1999 L.K. Advani offered him a Rajya Sabha seat in the eminent personalities category, which he accepted.

The most interesting parts of the book are the ones on the Bhopal Gas (Tragedy) Case and the Second Judges Case. Mr. Nariman argued the Bhopal Gas Case for Union Carbide before the trial court, Madhya Pradesh High Court and the Supreme Court! He has been heckled enough by journalists and activists on the issue. The chapter is meant to be a defence of Narimans position and tries to argue against the toxicity of anger. He tries to juxtapose his exchange of letters with Professor Upendra Baxi in a systematic attempt at demolishing his (somewhat pompous) argumentsit is also a tribute to Baxi that one whole chapter has been devoted by the author to just doing this! The chapter also betrays the fact that being a lawyer of unnatural capacity Nariman has this tingling feeling that he has subconsciously influenced outcomes (not a good feeling for a man with a conscience). The poignancy of the chapter is summed up by Nariman with a beautiful quote from the Rubaiyat of Omar Khayyam, The Moving Finger writes; and having writ Moves on. He has said in a recent interview that if the case is offered today he wont take it up; he accepted the brief then because he was young and ambitious.

Nariman regrets having argued the Second Judges Case in the manner he didA Case I WonBut Which I Would Prefer to Have Lost. The verdict of the Supreme Court in the case brought into existence the system of appointment of judges to the superior courts by a collegium of judges and reduced the role of the executive to that of a rubber stamp. With experience, the decision has been found to be the most damaging to the functioning of the judicial system. Narimans confession may be disarming, but he has blood on his hands.

In Narimans own words, in legal practice, It is an illusion to think that great cases are won or lost because of their inherent strength or weakness. In any case it is not universally true. Advocacy plays a vital role, simply because the judge is also human, like the advocate.

What seems to have sustained Nariman through a long career is the challenge of winning a difficult case with the power of his intellect and personality. On reaching the end of the book, one doesnt have any feel of the emotional side of Narimans personality. The skullduggery that goes on in the works of an advocate for being effective in the courtroom probably would not make for pleasant reading. In the world of legal practice there may be justifications, if it amounts to something larger than lifeif a man endowed with great forensic powers is working towards some grand design.

A peep into Narimans larger worldview, which one gets on rare occasions in the book, is quite chilling:

Over the past 59 years at the Bar, I have come to realize that justice is elusive, sometimes unpredictable, and often unsatisfying.I must confess that I am never too surprised at frequent protestations against injustice whether in the High Courts or in the Supreme Court. Justice is so often a matter of perception on which opinions genuinely differ.

So, where are we headed?

The book has a nice large picture of the author on the cover staring at you and through you into the distant future.

The book doesnt read like any autobiography. By the end one realizes that the book is a collection of intellectual pieces of events, issues and people of his times. (However, many of the actors on the scene today, with many of whom Nariman rubs shoulders in the courtrooms almost every other day, find hardly any mention in the book.) If the book is a biography of his intellect (rather than his person), it gives a curious insight into Narimans intellect. He does not believe much in overarching arguments or unifying principles or any higher powers. Going by his contribution in a wide variety of cases, Narimans intellectual output has been prodigious; but there is no ideology or axis that you can hang his thoughts on. There is no big idea that one can say is Narimans contribution to Indian jurisprudence. Further, there are no unflinching positions taken in a fight to the finish (outside cases).

Fali Narimans contribution has been that of a master craftsman, tucking the system in different directions as per the exigencies

of the case and the issue at hand. A strongly worded centrepage article by him in a national daily can go a long way to pressure Supreme Court judges to fall in line and disclose their assets. Nariman thinks in unstructured waysa pattern probably truer to life. This is what gives the book and its author their character.

Arunav Patnaik is a practicing advocate based in Delhi.