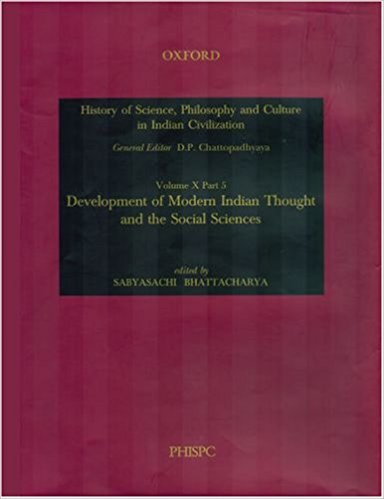 The aim of the book is to explicate the moorings and development of social, economic and political thought prior to the institutionalization of social science disciplines at universities in India. The papers included in the book, and particularly the introduction of the editor, seek to delineate the ‘pre-history’ of the aforesaid disciplines in such a way as to dispel the general assumption that social science theory (by social science I mean, inter alia, political, social, and economic sciences) originated in the ‘metropolitan’ West and what concerned the social scientists in the periphery, the colony, is the dissemination, empirical verification, or local application of the theories.

The book has been divided into five sections.

Section I deals primarily with the prehistory of Economics presenting diverse conceptions of economy and the internal debates that they threw up.

Commenting on the ‘Evolution of economic thinking in India’, Ratan Khasnabis feels ‘that there was a heterogeneity in the social identity of the people of the country that brought forward the possibility of multiple discourse in social thought, each discourse having its own way of looking into the colonial economy’ (p. 3). He traces the different shades of this diversity reflected in the thinking of prominent leaders and in the distinct social constituencies that made their presence felt in the nationalist movement. L.C. Jain explores the fate of Gandhi’s economic thinking that challenged some of the fundamentals of the discipline but got ‘totally sidelined in independent India by his followers in decision-making positions’ (p. 44). He thinks that the main reason for such a turn was, ‘after Gandhi’s exit, the centre of economic strategy thinking shifted largely from political leadership to government leadership and professional economists’ (p. 54), and ‘from development (self-development) of the people, to the development of the economy’ (p. 63).