A Voyage of Discovery Recorded 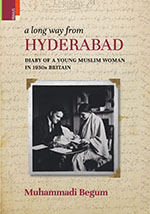 This book is the  translation of a diary in Urdu by a young Muslim woman Muhammadi Begum that was written when she was a student in England at Oxford University in the early 1930s. Born in an elite Muslim family in Hyderabad, she studied Arabic, Persian and Urdu at home, and went on to do a BA at Osmania University where she topped her class; her academic prowess was rewarded by a scholarship to Oxford University by the Nizam’s Government. Needless to say, this was an unusual trajectory for a Muslim woman at this time, even one from a privileged background. In Muhammadi Begum’s case, her family was long invested in the issue of Muslim social reform, in particular, women’s education. Nor was she the only female writer in her family. Her mother, Qaiseri Begum’s memoir,
Kitab-i-Zindagi or Book of Life appeared in the magazine Urdu Nama in the 1960s and chronicled the everyday lives, beliefs and rituals of middle-class Muslim women first in Delhi, and later, in the Deccan where she moved. Interestingly, Qaiseri Begum’s grandfather was the well-known writer Maulvi Nazir Ahmad who penned the 19th century Urdu bestseller, Mirat-ul-Uroos (The Bride’s Mirror), a didactic novel that championed the cause of female literacy amongst Muslim women in India.

Written in 1935, the diary chronicles the early part of her stay in Oxford. It was discovered by her family after her death in 1990, and eventually painstakingly translated and edited by her daughters and other family members. What they manage to capture in the translation is the tone of the diary: the personal feelings of an intelligent young woman navigating an alien land, attempting to understand and assimilate the best of the culture she encountered, even as she contrasted it—both positively and negatively—with her own. It bears noting that Muhammadi Begum was not alone in England; her husband, Delhi-born Jamil Husain worked in the Hyderabad Civil Service but took leave to accompany his wife and studied development at the Institute of Rural Economy in Oxford. The couple had two children while they were in England, and indeed, the demands of parenthood in a context without familial support in a faraway country is a recurring theme in the diary.