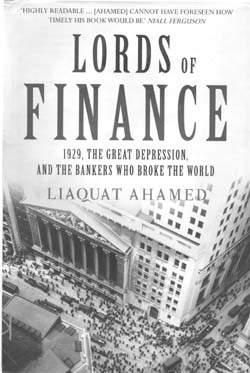 This is one of the finest books that I, at any rate, have ever read. Nor have I come across anyone who has read it say anything else. It is superb not just in the way it has been written, but also in what it contains. Above all, it is absolutely unique in the angle from which it has come at the topic, the Great Depression of 1929–32. It is a gigantic brainwave to have thought of writing about the Great Depression, about which so much has been written, by using the device of telling the story through the lives of the heads of the four main central banks then—the US, Britain, France and Germany. To have executed the project in the manner that the author has done borders on genius. Indeed, Liaquat Ahamed, one time World Banker and one time investment banker, puts not just economists to shame but also historians.

This, verily, is how the technical complexities of economics have to be simplified; this in fact is how historical facts have to be knit together. In the process, we get another bonus: Ahamed shows how, in the end, individuals matter so very much to outcomes, and how much of history rotates on the pivots of personal preferences, likes, dislikes, beliefs of the few, and on accidents. In human affairs, it is chance, not design, which is the key determinant. Because Ahamed has written the book so well, it deserves to be read widely, not just so that they can find out what happened and why but also to be warned that it could, and will, happen again.

Even the layest of lay readers will have no difficulty in understanding this book. The intricacies of global and domestic finance, of global politics, the motivations and the mistakes of individuals, the correctives and last but not least, egos, notably French egos, have all been brought together in this book as if in grand orchestra, author conducting. The main actors spring to life, not in the imaginary manner that some recent British historians have begun to adopt to add drama, (‘Hitler paled’ or ‘Roosevelt frowned’, ‘Babur looked worried’, ‘Zafar was depressed’) but in a wholly credible and properly sourced way. For each description or anecdote that leads you to suspect that the author could be pulling a fast one—as when he says at one point that in 1923 the French Prime Minister and his Defence Minister had a public shouting match on Downing Street over something they did not see eye to eye about—there is a reference. As far as I am concerned, the book is very nearly perfect. The pity is that Ahamed will not be able to replicate the feat.