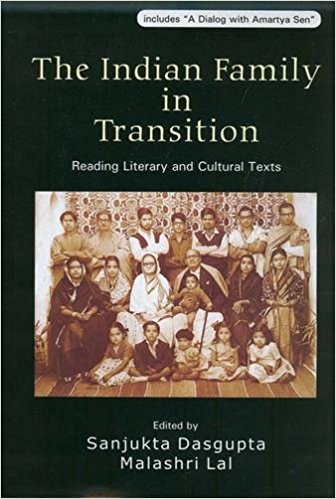 This book under review draws upon a wealth of talent to throw light on an institution that even as it is familiar remains been little examined. This book explores literary and cultural representations of the Indian family to examine the evolution of the Indian family from ancient times, through the colonial period to the present. Divided into six parts, each part focuses on a different era. Part One deals with Colonial families: Re-Visiting Tradition, Part Two with a Socio-Economic Perspective on Post-Colonial families; Part Three deals with Literary Representations while Part Four explores Cultural Representations. Part Five has Memoirs from writers including the best-known names of the Indian literary scene such as Shashi Deshpande and Makarand Paranjape. The sixth and final part of this book is an interview with Amartya Sen.

The first part uses literary texts penned by women writers of Bengal during the nineteenth century to show the tremendous oppression that intelligent women who had entered their marital homes as child brides faced, ‘such misery only because one was a woman! We were in any case imprisoned like thieves, and on top of that, reading was yet another crime . . . We suffered so much just to learn to read’ (Sarkar, 1999: 171).

The very condescending attitudes of ostensibly enlightened Brahmo husbands who sought only to replace the diktat of the joint family or elders of the family with their own with little concern for the woman’s own preferences is also brought out. Indeed, texts of various other parts of the country demonstrate that such attitudes very widespread. On p. 206, N. Venugopal Rao’s ‘Reflections of Family and Woman in Telugu Literature’ has this extract: ‘I am not suggesting you stop other works. Household chores are inevitable for women. Instead of wasting your time in talking to neighbours after your work, it would be better to study. In the world, the wife should always help her husband. Unless she gets educated, she cannot fulfill her duty completely’.