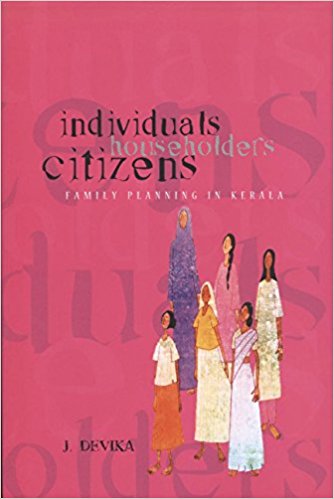 Kerala has, since the 1970s, assumed an undisputed position for being a ‘model’ of Third World development. The pillars of this model are a well-rehearsed litany—favourable sex ratios, high literacy, high life expectancy, low child mortality, and, yes, . . . low fertility. Till the 1970s, Kerala had the highest population growth in the country. While birth rates declined only marginally from 40 to 31 between 1930–1970, there was a phenomenal drop from 31 to 19.6 between 1970 and 1990 (Government of Kerala website information). This centrepiece of the Kerala Model has been attributed variously to higher female status and literacy, a well established health and family planning system, and political commitment to development. Certainly, birth control has, in recent history, come to symbolize the Malayali people’s ability to exercise rational choices for a better society.

Take, for example, the changing notions around sexuality. In the 1930s, artificial birth control was strongly opposed in public opinion; it was inimical to ‘self control’ and there was a danger that the availability of artificial forms of fertility control would unleash promiscuity in men and women. The 1930s were also the period when the matrilineal form of family prevailed, albeit on its last legs, in the majority Nayar community. The complex matrilineal arrangement of the time did not require the presence of the father in the upbringing of his children, and neither were there moral proscriptions against Nayar women having lovers outside of marriage. By the 1940s and 50s, a public debate ensued on the appropriate nature and role of sex in conjugal relations. In influential writings, the distinction between kamam (lust) and premam (romantic love) began to take shape. The latter, of a higher order, was seen as proper for the relationship between rational men and women; it was progressive and apposite for the modern times that Kerala was nudging itself into. What was inadvertently being forged, argues Devika, was a particular sexual morality that encouraged monogamy and the nuclear family—a confluence of transformations in social norms and structures, and individual behaviours in which artificial birth control became acceptable and a rational practice.