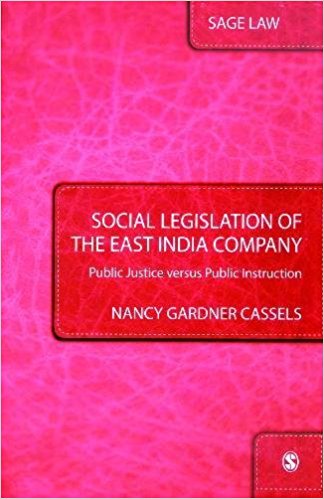 Nancy Gardner Cassels’s book as the title suggests is a scholarly account of a range of East India Company legislation across various fields, from Sati to Emigrant labour, and from Meriah Sacrifice to the Pilgrim tax. Unlike recent work on colonial law, it is not invested in investigating the epistemological ‘re-coding’ of law in the aftermath of British conquest and the (subsequent) identification of law with the governing agent (Pawate, Bhattacharaya-Panda, Menski). Nor does it take as its subject legislation as a modality of governance and its role in the re-ordering of the social world (Singha, Kolsky). It is the texture of legislative formulation—rather than the significance of its intervention —and the debates in its surround that is described in its detail. The earlier chapters on Thugee, Dacoitee, Sati, the opium trade and bonded labour among other themes, while scrupulous in documentation, do not have any substantially new insights to offer, particularly in the light of recent literature on these subjects.

Even so there is much to be said in bringing together what is otherwise disparately treated. The reader is given —in large helping—a flavour of the legal language and the diverse arguments for the various issues under examination. That the Company was deeply engaged with what were undoubtedly pressing issues, and did so in an extremely sophisticated way, even by contemporary standards, is proved beyond doubt. However the possible linkages between the trajectory of law in India and legislation as it was being specifically formulated in the metropolis is not brought to bear sufficiently; whether it be the Master Servant Acts as well as the continuing criminal liabilities for breach of contract which held good well into the 19th century in England, or full legal personality which was given to women in a similarly late fashion. Their relationship with ‘colonial’ law gives a certain specific density to categories such as liberty and freedom which would need to be excavated for an understanding of the significance of such categories in their deployment in the subcontinent. Otherwise the treatment of Company legislation in India would, it might be argued, be tantamount to treating it in vacuo.