Textured Fabric of A City 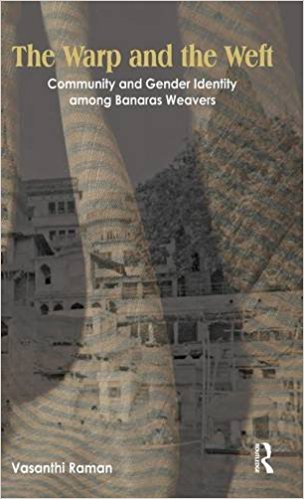 Textured Fabric of A City
Chitra Joshi
THE WARP AND THE WEFT: COMMUNITY AND GENDER IDENTITY AMONG BANARAS WEAVERS by Vasanthi Raman Routledge, New Delhi, 2010, 2011, 384 pp., price not stated
March 2011, volume 35, No 3

Vasanthi Ramans The Warp and the Weft examines the changing contours of community and identity in the city of Banaras through a focus on Muslim handloom weavers employed in the famed sari industry of the city. Using the metaphor of tana bana (warp and weft) to characterize the close intermeshing of relations between Hindus and Muslims in Banaras, Raman underlines how the distinctive culture of the city survives through crisis and changes over the last two decades.

Ramans historical survey of the twentieth century gives a sense of the textured fabric of the city in which Muslim artisans and elites (ashrafs) were an integral part. Conflicts between religious communities were not absent in the past. Yet, as the author shows, there were shared spaces and traditions through which a composite culture could be sustained and recreated. Raman discusses the ways in which Muslim identities evolved and transformed over the twentieth century.

The 1920s and 1930s, in Banaras and elsewhere in North Indiaas Nandini Gooptu, Sandria Freitag and others have elaboratedwere marked by movements for self assertion by militant Hindu and Muslim organizations. Ramans work takes us into the 1990s, a period not explored in earlier studies: a period marked by growing communal tensions and a crisis in the economy of the city. Through a use of ethnographic material and other contemporary documents, Raman examines the impact of the contemporary political and economic situation on weavers, particularly on women in weaving households. Her study traces the trajectories of different localities: Madanpura, Bazardiha, Jalalipur and LohtaMehmoodpur. Madanpura was an area where a relatively prosperous class of traders and artisans had consolidated their position through production and trade in textiles. Jalalilpura and Lohta, in contrast, were populated by poorer weavers.