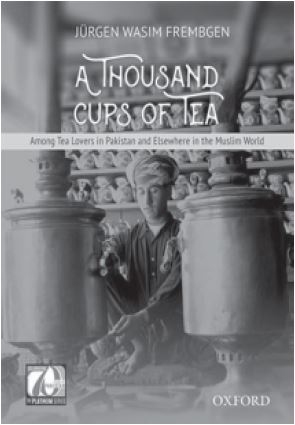 Symbolizing A Relationship
Iymon Majid
A THOUSAND CUPS OF TEA: AMONG TEA LOVERS IN PAKISTAN AND ELSEWHERE IN THE MUSLIM WORLD by Jurgen Wasim Frembgen Oxford University Press, Karachi, 1982, 109 pp., 1295
March 2018, volume 42, No 3

Making tea is an art and making a perfect cup—hold on, is there a universally accepted way of brewing tea? There is, if we believe, the International Standard Organization; but who cares! George Orwell liked it without sugar, Maulana Azad liked it without milk —he thought adding milk is a British innovation. Hamid Dabashi likes it only in transparent cups. Gandhi didn’t like it all. Kashmiris prefer it with salt and Tibetans like it with Yak butter.

There are a thousand ways of preparing tea and every preparation is heavily influenced by local culture and customs. How one prepares and drinks tea is an identity marker in an increasingly globalized world or this is what Jurgen Wasim Frembgen is suggesting in his travelogue A Thousand Cups of Tea. He takes us through a journey in which he presents the meaning of tea. Not just as a beverage but as a way of living from Morocco to Pakistan to India. Tea symbolizes a relationship.