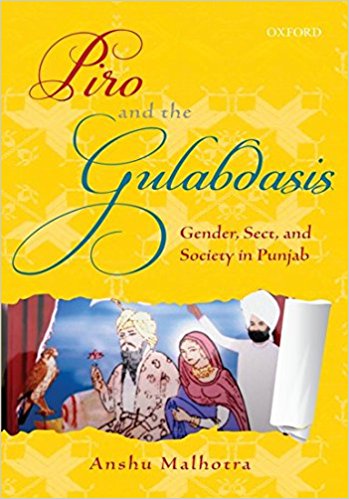 This masterly new work by Delhi University historian Anshu Malhotra enlivens the study of religion, gender, and caste in late colonial Punjab, with compelling explorations of post-Partition religious and cultural forms. The centre of her study is Piro (d. 1872), a female devotee of a nineteenth century guru named Gulabdas (1809-1873), who led a sect that came to be known by his name: the Gulabdasis. The work which will be accessible to and valued by scholars in colonial history, postcolonial studies, religious studies, and gender studies, as well as far beyond these. It provides both a detailed and textured account of Piro and her work in the context of the Gulabdasi community (chapters 1-5) as well as a multi-faceted exploration of the significance and legacy of the community in various contexts both within the colonial period (through an account of the Lahore Singh Sabha Sikh reformer Giani Ditt Singh, formerly called Sant Ditta Ram as a follower of Gulabdas) and accounts of both modern literary accounts of Piro’s life and the ongoing community formations of the Gulabdas community, in chapters 7 and 8 respectively. More broadly, it provides a prolonged meditation on the writing of history itself, with a capacious embrace of literary and anthropological approaches and practices to enhance and deepen the historical project.