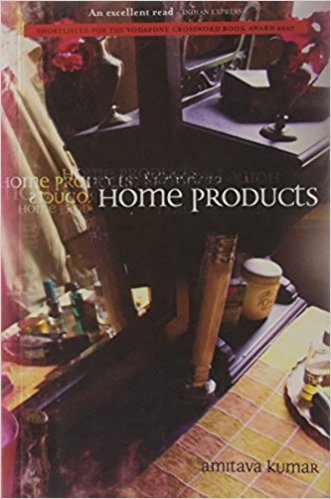 Home Products, Amitava Kumar’s first novel, is a story of two stories, the story that the words on a page tell us and the other, often more interesting one, the story about the story; that is the way it reaches its readers, the traces of its scaffolding visible, made visible on purpose by the writer who almost in a late modernist gesture, takes us to that great workshop, the writer’s mind, his table and on it, an open exhibition of his wares. That is the sense with which the book begins and ends, an image similar to one of Picasso’s famous series of drawings on the theme of the artist and his model, painting brush in one hand, the other hand on a model’s exposed thigh and the canvas inside the canvas suggesting the in-betweenness of the story. Home Products tells no real story; it lives on the blurred zone between life and art, between Kumar’s story and Binod’s. Binod, a journalist by profession, is asked by a filmmaker to convert his editorial into a story, ‘a story about the life in small towns and a woman’s lonely ambition’. In real life, though Kumar never talks about this anywhere, this is the story of Madhumita Shukla, a small time poetess from the state of Uttar Pradesh who was murdered, allegedly, by the man, a minister in the state government, whose child she was carrying when she died.