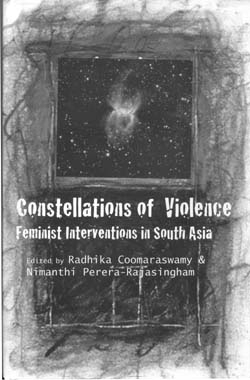 This important anthology brings together seven case studies and one essay that analyse the current thinking about gender-based violence, a subject that has got very little academic attention so far. It will become mandatory reading for those interested in issues of violence, social change, security and feminist scholarship. The book begins by recalling the story of Jane Eyre, but quickly moves on to chart uniquely South Asian experiences and theoretical perspectives, making a solid contribution towards bringing to light the region’s own lively feminist scholarship on this subject. Kumkum Sangari’s brilliant essay, ‘Gendered Violence, National Boundaries and Culture’ makes the point that although gender-based violence appears to target individual women, it may be placed on a continuum with examples of collective violence like communal riot. She uses the term ‘constellations’ to describe the circle of actors complicit in allowing violence against women to happen. Surveying the different kinds of gender-based violence prevalent in different parts of South Asia, she points out some common features: violence is usually meant to make an example of the victim for others, thus creating a difference between her and other women; it discredits the victim’s point of view; it tends to be premeditated, involves more than one perpetrator and violence has a public dimension even when it is domestic violence (p. 11). Discussing how a wide range of actors become involved with, even complicit around, each act or incident of violence, she challenges the idea that culture or tradition makes for violence, in each of its varieties, somewhat special to context. Material factors and the insecurities released by change generate violence against women, she argues.